Just to let my readers know I’m still around, I’ll summarize the high points of the trip my husband Bruno and I took in the first half of May to Arizona. The impetus for the trip was the graduation of my grandson Zeno Dellby—in computer science from Arizona State, Tempe.

The day after the graduation, pilot Beth took me for a flight-seeing ride north of Scottsdale. It’s always a treat to fly in a Cessna 172 with her. 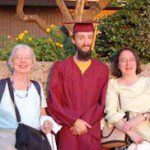 Three generations of Chapples and Dellbys, with editor Beth on the right.

A very rarely blooming cactus greeted us at the Desert Botanical Garden.

Late afternoon view of the Grand Canyon from near the Watchtower

View from the Sedona Airport


Leaving the Phoenix area we spent a couple of hours at their Desert Botanical Garden, a beautiful place on a not-too-hot day in May.

Three nights on the South Rim of the Grand Canyon took me back there for the first time in 29 years. The last time I was there, I hiked to the bottom, stayed at Phantom Ranch, and back up the next day. Never again! Bruno took some nice shots, but I was disappointed by the amount of haze we had in all our views of the canyon, dulling the colors of the billion-year-old and more geological formations. It’s largely caused, as the rangers and others explain, by industrial pollution from as far away as China. The night we heard a ranger lecture about the geology was when the full moon was at its perigee, or closest point to the earth. No picture, but what a gorgeous sight!

Onward to meet friends at the Museum of Northern Arizona, in the outskirts of Flagstaff—an excellent small museum about the geology, archeology, and art of the area. Then on to get a glimpse of Oak Creek Canyon and Sedona, where we took a Pink Jeep Tour to the Honanki ruins (12th-13th century cliff dwellings) and enjoyed staying in an outstanding B&B (the Creekside Inn), not to mention doing some great eating there and elsewhere on the trip!

All-in-all a fine respite from working on books about Yellowstone. More about those later.