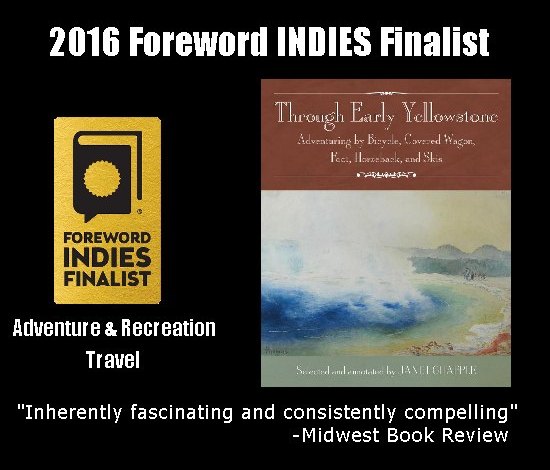 We’re celebrating at Granite Peak Publications since we learned that our historical anthology, published in 2016, has a good chance of winning top recognition for that year! Through Early Yellowstone: Adventuring by Bicycle, Covered Wagon, Foot, Horseback, and Skis is a finalist in two categories in this year’s contest run by Foreword Reviews, the foremost organization in helping promote outstanding independent press publications. The categories we entered are: Adventure & Recreation and Travel.

During the 21st century I have loved researching in libraries on both coasts and in Montana and Wyoming to locate the best early Yellowstone writings that need to be preserved in a modern book. By 2003 I had divided my findings into 11 categories, including early expeditions, the public entering the new park, early visits by various means, wildlife, poetry and songs, and other subjects. Wow! Even a sampling of the 85 articles I’d read and enjoyed by 2003 was way too much to fit into one collection.

Still, I kept reading. By 2007 I had read a great deal more but managed to pare my findings and categories down to a manageable number of articles and thought it was time to start seeking a publisher. Compiling what I was then calling Magnificent Playground required using my subjective judgment to reproduce the best written and most entertaining of these. In my letter to one university press, I acknowledged my awareness of two other Yellowstone historical anthologies, Old Yellowstone Days, edited by Paul Schullery, and Ho! for Wonderland, edited by park historian Lee Whittlesey and Betsy Watry. I intended to complement these two predecessor collections, not to compete with them. I wanted to avoid repeating descriptions of the many wonders of the park as much as possible, while giving readers a fascinating taste of early, long-out-of-print visitors’ accounts written by entertaining and talented writers and intrepid adventurers.

My editor/publisher/daughter Beth and I decided to publish the book with Granite Peak Publications, which up to that time had concentrated on putting out Yellowstone Treasures. Beth was particularly good at eliminating authors I had become enamored of but who did not fit well into the collection for our readers. I decided that we needed to include the short writings that I call snippets to show how the idea of an area that begged for preservation as the first national park gradually became a prime destination for travelers from all over the world.

The completion of the Northern Pacific Railroad (NPRR) across Montana in 1883 made access to the park much more convenient than before. A majority of the accounts in Through Early Yellowstone were written by people who used the NPRR and then traveled by horseback or horse-driven coach. Automobiles entered the park for the first time late in the 1915 season, and by 1917 they had taken over completely. It seemed to me the logical point for this anthology to end.

I am proudest of having found and been able to reproduce twenty-seven watercolor sketches, which (as the artist wrote to a friend) “are almost untouched travel sketches, quite half, if not more, of the Park ones being taken on the logger-head of the Mexican saddle of my Cayuse [Indian pony].” The artist, Thomas H. Thomas, visited from Wales in 1884. He wrote a delightful two-part article for a London magazine called The Graphic that turned many of his watercolors into engravings. In my book we reproduce many of the engravings along with his articles and roughly half-size reproductions of his watercolors. These reside in the archives of the National Museum of Wales and have never before been seen in this country.