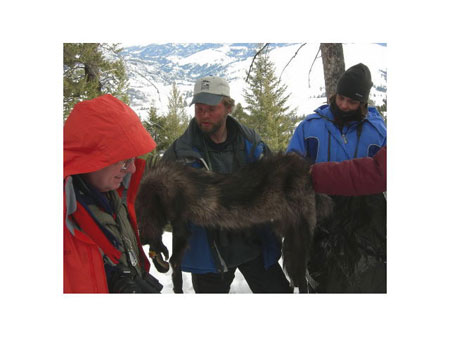 In this Tuesday’s “Science Times” section of the New York Times, freelance science writer Jim Robbins explains the push-pull between the lives of Yellowstone’s wolf packs (and the scientists who study them) and the needs and requirements of hunters and ranchers in the three surrounding states.

Since 2011 Montana and Idaho have been conducting managed wolf hunts, but in Wyoming a U.S. Court of Appeals has only this March approved a wolf-hunting plan that is deemed not to endanger the survival of the species in that state.

All the controversy about wolves stems from the 1995 and ’96 introduction of gray wolves (Canis lupus irremotus) into the park (and also into Idaho) from Alberta and British Columbia, Canada. Their population soared within a few years to around 150 wolves in the Greater Yellowstone Ecosystem, and scientists like Dr. Douglas Smith found, as quoted by Robbins, that “Yellowstone is the best place in the world to view wolves”—and to study them. This is especially true because the Yellowstone wolves do not fear the thousands of eager visitors who flock there—and incidentally add money to the regional economy. The wolves are thus quite readily visible.

In the years after the introduction of wolves, neighboring ranchers were understandably distressed. Some of their cattle, sheep, and even dogs were killed; before wolf hunting was authorized some ranchers were reimbursed by nonprofit organizations for their losses. It is hoped that protection within the park, combined with limited hunting outside its borders, will provide the needed balance and keep the population of Yellowstone’s wolves to approximately one hundred, as has happened in the last few years.

Robbins tells us much more about the results of research done by Smith and his colleagues. Longevity and social hierarchy within the packs are now better understood, and observation has revealed that wise older wolves serve an important role. Dr. Smith believes that packs are matrilineal. “Males come and go . . . but Gramma, Mom, and the daughter are the ones that stick around.” Here is a link to the whole article, “The New Threat to Wolves in and around Yellowstone.”

For some earlier blog posts about wolves here at YellowstoneTreasures.com, just enter “wolves” in the search bar.