Bison in town? Oh my!

Toward the end of a remarkable Montana Public Radio series we see and hear from high school students in Gardiner, Montana, who have learned how to get along with bison on their football field. Now I know how they get rid of the bison patties I’ve often seen there, especially in winter and early spring. Students with detention get to pick them up and put them in buckets. 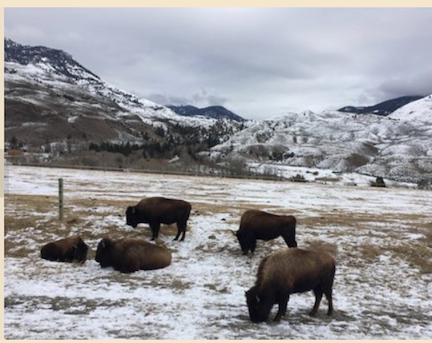 I first mentioned the seven-part podcast titled Threshold from MPR in my May 17th blog post. Since then, I’ve made it a point to listen to all the parts. It’s well worth the half hour each one takes. Amy Martin and her team are doing a superb job giving us a balanced and often moving report on what is being done to bring large numbers of bison back to northern Montana’s plains. Until the end of the nineteenth century, an estimated sixty million of them roamed the Great Plains and were essential to the natives’ way of life.

In the Yellowstone Treasures section on Living Things, I explain that the bison “symbolizes the wide open spaces of the West. Ironically, the bison is also probably the most grievous case of man’s wanton destruction of a natural resource in America’s history. Not only did hunters nearly eradicate the bison during the late 1800s, but the slaughter was actually encouraged by the government to suppress the Native American Indians who depended upon them.”

Listen to the MPR podcast to learn what Montana’s tribes and other interested people are doing to help restore bison to the plains.