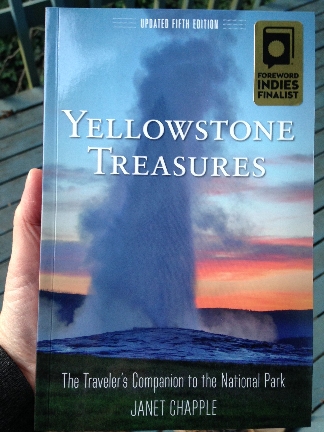 Big news! On March 14, 2018, the Independent Book Publishers Association announced that Yellowstone Treasures: The Traveler’s Companion to the National Park, updated fifth edition (2017) is a finalist in the 30th annual IBPA Benjamin Franklin Awards in the travel category. This is a true honor, since finalist status with IBPA means the book will receive either a Gold or a Silver medal. The IBPA Benjamin Franklin Awards recognize excellence in book editorial and design in 55 categories. See this year’s finalists on the IBPA Book Awards page.

Then on March 20 we learned that the popular guidebook has been recognized as a finalist in the 20th annual Foreword INDIES Book of the Year Awards, too! The Foreword Reviews editorial team selected their finalists from more than 2,000 individual titles spread across 65 genres. The complete list of finalists for the Foreword INDIES awards can be found at: https://www.forewordreviews.com/awards/finalists/2017/. Winners are now being decided by a panel of judges across the country, reflecting Foreword’s readership of booksellers and librarians.

We’re glad the new cover, 65 new color photos, and updates to the geyser and wildlife viewing information have captured both IBPA’s and Foreword’s attention again this year.

Read the full news release in the media kit or learn about our books’ previous awards.