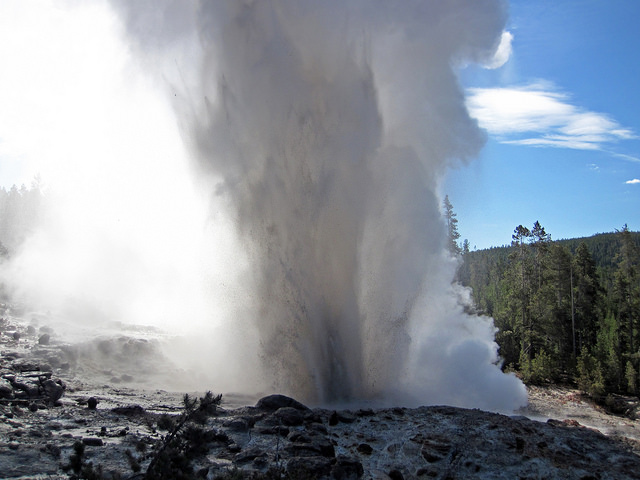 This photo of a major eruption of Steamboat Geyser gives a sense of its power but not its full height!

Every time we update the Yellowstone Treasures guidebook, such as for the second printing of the fifth edition in spring 2018, there are numerous changes to the hot springs and geysers that must be reviewed and considered. Not only that, “the number of hot springs in the park has been estimated to be around 10,000. Geysers known to have erupted or erupting now number more than 1,200” (Yellowstone Treasures, page 61).

Here are a few of the geyser changes since the cutoff date for the first printing, February 2017. During 2017 Atomizer Geyser (p. 96) noticeably slowed its interval down from twice a day to an average of 20 hours. Page 93 of the first printing says Giant Geyser last erupted on September 28, 2015 (and that was after a five-and-a-half year hiatus, so it was pretty important). But nature has been busy proving the guidebook wrong. Giant erupted on July 7, October 9, and November 3, 2017, so we included the November date as the last eruption. Now the most recent eruption was actually July 24, 2018, and that was the third time in the month of July.

We are fortunate to have a website called GeyserTimes.org, where geyser gazers can log their observations or the notes from a ranger or scientist at the US Geological Survey (USGS) Yellowstone Volcano Observatory. Readings from seismometers, thermometers, and water discharge monitors are used to record eruptions even when nobody is there to witness them. That is how we know that Steamboat Geyser started erupting again on March 15, 2018, too late to get into the second printing. On page 233, it unfortunately still says “After eruptions in 2003 and 2005, Steamboat erupted once each in 2013 and 2014.” Yet as of today there have been 11 more since March 15, with the latest occurring on July 20, 2018! The USGS is keeping a running count of Steamboat’s water eruptions at the Yellowstone Volcano Observatory page.

You may have a chance to see the Giant or Steamboat Geysers on your trip to Yellowstone. Stay informed with Yellowstone Treasures, both the book and this website.

Photo credit: James St. John, June 4, 2018. Reproduced courtesy of a partial Creative Commons license. More photos and more about the history of Steamboat Geyser is available at on the geologist’s Flickr page for this photo.