Cycling through early Yellowstone in 1892 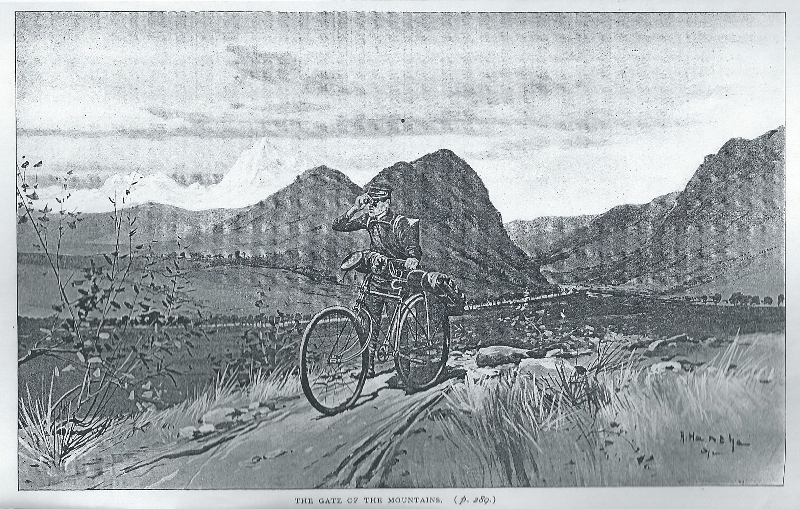 The Gate of the Mountains by Albert Hencke (1865-1936), originally published in 1893 in Outing magazine. Click for a larger version.

This month Dave Iltis of Cycling Utah decided to reprint Janet Chapple’s annotated version of “Lenz’s World Tour Awheel” in its entirety in the late summer issue of their magazine, Cycling Utah / Cycling West. Cycling Utah has been providing cycling news, information and events in the western United States since 1993. Dave bought the book in the shop at the Old Faithful Visitor Education Center and decided that the charming adventure story deserves wide readership among bicycle riders. You can even get the whole magazine issue as a free download from that website.

Philadelphia-born Frank Lenz made his pioneering side trip through the then 20-year-old Yellowstone National Park as part of his solo round-the-world cycling journey. It took place in late August 1892, but even so he encountered snow. As he says:

I was congratulating myself upon having passed through the most uncomfortable portion of my trip when I espied it raining on the opposite side of the river, and soon the icy-cold spray reached me. When within half a mile of a government engineer’s camp, what was my surprise to see the rain change into snow. As it blew up quite strong. I made for the cook’s tent for shelter, and here for three hours I thawed out my fingers and feet, which were nearly frozen.

Lenz’s story is one of the highlights of our enjoyable anthology, Through Early Yellowstone: Adventuring by Bicycle, Covered Wagon, Foot, Horseback, and Skis. Other highlights, according to Aaron Parrett’s Montana book roundup in Montana: The Magazine of Western History, include Nathaniel P. Langford’s 1871 “Wonders of the Yellowstone,” Margaret Andrews Allen’s “A Family Camp in Yellowstone Park” (1885) and the journalist Ray Stannard Baker’s “A Place of Marvels: Yellowstone Park As It Now Is” (1903). You can read this and other reviews to learn more.

If you are interested in the shoulder seasons for cycling in the park, see the National Park Service’s Spring & Fall Bicycling page.