Having returned from my 2019 winter trip to Yellowstone about a week ago, I’m still visualizing the beautiful snow-covered landscapes I was recently privileged to pass through. And for a present-day Californian (but raised in Montana), it was a particular delight to watch it snow.

I realize that now, in my mid eighties, it is unlikely that I’ll go again in winter. As it happened, we were in the middle of the government shut-down, but, thanks to the concessionaire Xanterra, which covered the cost of grooming the roads as well as furnishing their usual pleasant rooms and good meals, we had no trouble getting around.

For potential visitors a little or a lot younger, I would still highly recommend that you go! The friends who joined me were able to handle the snowy trails around Upper Geyser Basin and Fountain Paint Pots. 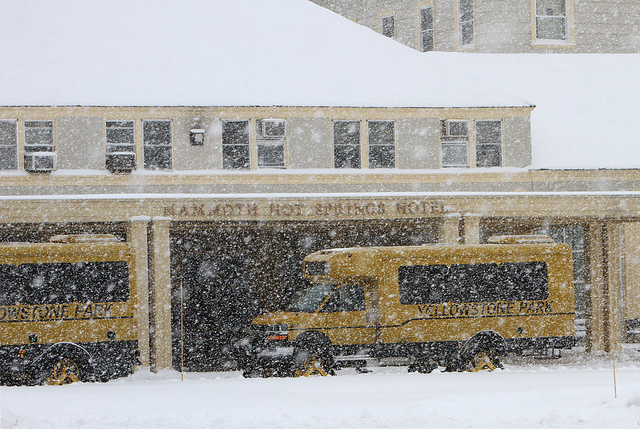 This was my fifth trip there in winter. Incidentally, I’ve been asked how many times I’ve been to Yellowstone altogether, and it must be in the dozens of times by now.

You need to leave your car in Mammoth. That’s where you cease to encounter plowed roads, since the park has a policy of simply grooming the other snowy roads, making them suitable only for snowcoaches, snowmobiles, and a few cross-country skiers. If you don’t know what a snowcoach is, take a look at this picture from 2012. Rather than the triangular tracks we used to ride on, the coaches now have very large, low pressure tires. The ride is quite smooth.

Phone numbers for Xanterra are (866) 439-7375 and (307) 344-7311. You would have to be extra lucky to find available rooms between now and winter closure, this year on March 3rd, but think about planning way ahead for next winter.
Keep in mind that you can’t see all the park in winter—except maybe on skis. The groomed roads are limited to Mammoth to Old Faithful, Norris to Canyon, and West Yellowstone to Norris. They do try to keep the road from Mammoth out the Northeast Entrance to Cooke City plowed. Here is the link to the map showing what roads are plowed, groomed, and closed: https://www.nps.gov/yell/planyourvisit/parkroads.htm.

I can’t resist crowing a bit: the snowcoach drivers and other Xanterra personnel were quick to let me know that they use and treasure my guidebook, Yellowstone Treasures, now in its fifth edition. In fact, when I sat behind the driver in one coach, he admitted to being a little nervous that he might get something wrong in his commentary. (He was superbly capable.) At the end of our trip, but before I left the snowcoach, he asked a colleague to pass the bound copy of the book (the one that Xanterra drivers share and use regularly), through the driver’s window for me to sign. I had never before seen a copy with a library-type binding!