Yellowstone Treasures: Home / About Us 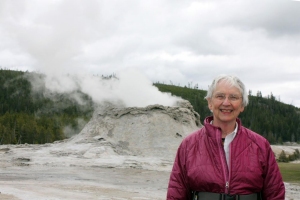 Born and raised in Billings, Montana, Janet was the second daughter of musician parents who both worked in Old Faithful Inn in 1939. Her father worked further summers as transportation agent. Read all about her wonderful times there with her sister Joan in “Janet celebrates her 75th anniversary in the park.”)

In 1995 she began work on the Yellowstone Treasures guidebook, visiting Yellowstone every year to sightsee, research, and attend Yellowstone Institute workshops. As part of her research she hiked on all the trails recommended in the guidebook, some of them several times, choosing the ones that are not too strenuous and help the visitor get away from the crowds.

Together with colleague Suzanne Cane, she translated from the French Yellowstone, Land of Wonders (University of Nebraska Press, 2013). Having turned over the publisher’s hat to her middle daughter Beth, she completed Through Early Yellowstone: Adventuring by Bicycle, Covered Wagon, Foot, Horseback, and Skis, an anthology of early writings and art unique to Yellowstone (Granite Peak Publications, 2016).

Janet now lives in Oakland, California. She is always happy to give advice to first-time Yellowstone visitors—or anyone who will listen!

Beth Chapple is publisher at Granite Peak Publications and a veteran freelance editor for book publishers, museums, and individual scholars. Since 2000 she has worked as developmental editor, copy editor, production editor, proofreader, indexer, web designer, and copywriter on the Yellowstone Treasures and Through Early Yellowstone projects. She holds a BA in German Studies from Stanford University and an MS in Technical Communication from University of Washington. She served on the board of the Northwest Editors Guild for eight years. A private pilot since 2004, Beth enjoys hiking and travel in her free time. She lives in Washington State. You can get in touch with her on Twitter (@EditorBeth and @GPPublications).

Bruno, Professor Emeritus of Geological Sciences at Brown University, contributed the geological history chapter to Yellowstone Treasures and wrote many of its original geological sidebars. In his academic career, he contributed articles on geochemistry to major scientific journals. Part of his research was in using radioactive isotopes to measure the ages of rocks in Montana and Wyoming, as well as in New England and Scotland. In addition, he used stable isotopes to determine ancient circulation patterns of waters when they had interacted with hot newly emplaced igneous rocks, in the Rockies and Scotland. He lived in Oakland until he passed away on January 29, 2018.

Jo-Ann extensively revised the geological history chapter to Yellowstone Treasures for both the 4th and 6th editions, and revised much of the geology all three of the most recent editions. She is a consulting geologist and an Adjunct Professor of Geosciences at Idaho State University, where she teaches a course in the Geology of Yellowstone and continues research in the field of structural geology. Her interests are wide ranging and have included commodity exploration, environmental restoration, and nuclear waste disposal in geologic terrains. Her geologic map of an area of very ancient rocks in southwestern Montana was recently published by the Montana Bureau of Mines and Geology. An old friend of Janet’s, she lives in Idaho Falls. 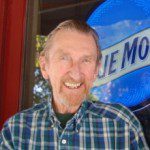 Linton made the excellent maps in Yellowstone Treasures, some of which can be seen on this website. Here’s one of the Canyon area. A civil engineer who retired in 1995 from California’s Department of Water Resources, he’s a long-time friend of Janet’s. He lived in Red Bluff, California, until he passed away on July 11, 2019. Janet writes: “Knowing I was casting about for a mapmaker, Linton offered to work on some drafts, and I was delighted to have his help. He started with base maps from NPS and other Internet sites and added everything I requested. We exchanged over 1500 e-mails across the country for a couple of years to make the 37 maps, which Linton created using Photoshop on his Macintosh. When it came time to make the final maps, Linton couldn’t bear to part with his “babies,” so he taught himself to use Adobe Illustrator and created them. He has stuck with the project through five editions, cheerfully updating maps as needed. I was incredibly lucky in my mapmaker!”

Suzanne contributed dozens of her wonderful photographs, specializing in the hot springs and terraces. For example, her Punch Bowl Spring photo is featured on page 99 of Yellowstone Treasures (2020), and her 2016 photos of Mammoth terraces grace pages 266 and 267. A librarian and teacher of English and French, she first got to know Janet many years ago at the Brown University swimming pool in Providence. During 2007 to 2010, they cotranslated and annotated Belgian travel writer Jules Leclercq’s beautifully written 1886 French travelogue called La Terre des Merveilles, published in 2013 as Yellowstone, Land of Wonders by University of Nebraska Press. She remained a beloved friend of the family until she passed away in late March 2022. Please see her obituary for more details.