A Yellowstone rock in the Smithsonian, Part I

Yellowstone Treasures: Home / Nuggets / A Yellowstone rock in the Smithsonian, Part I

A beautiful specimen of Yellowstone geyserite

Can you imagine the superintendent of a pristine national park chopping off a piece of the scenery and sending it to Washington? Well, that seems to be just what Yellowstone’s second superintendent, Col. Philetus W. Norris, did in 1881, only nine years after the park was established.

Apparently believing people should be able to see what curiosities Yellowstone had to offer, Norris gave the Smithsonian Institution a large piece of geyserite. They have it nicely displayed as part of their geology exhibit in the National Museum of Natural History.

In 2006 I was delighted to get to see this specimen in its glass case. An interpretive sign titled “What Hot Water Leaves Behind” shows how hot water dissolves the minerals and, when brought up by geysers, leaves geyserite at the surface. There’s also a picture of Rocket Geyser in Upper Geyser Basin erupting and thus gradually building its cone. A small tree limb coated with geyserite is in the case with the spectacular cone shown below. 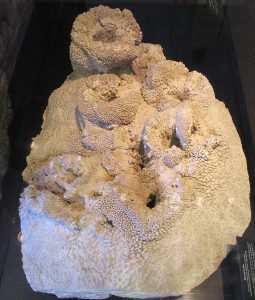 The geyser cone is about a yard (1 m) high and a little less in width. Its base is made up of nodules tightly cemented together. Its surface has seven larger and several smaller vents, around which cluster cylindrical nodules—or some seem more like spikes. The formation at the top of the picture is 3 to 4 inches (8-10 cm) higher than the rest.

Yellowstone National Park, Wyoming
In 1881, when this geyserite cone was collected, steam and hot water erupted from its 17 vents to a height of 9 m (30 ft). As the water cooled and evaporated, it deposited geyserite silica, a variety of opal.
Gift of Col. P. W. Norris, 35559

The Department of Mineral Sciences at the Smithsonian assures me they have no further information on this specimen.

IN THE GUIDEBOOK: Find out about Superintendent Norris’s favorite spot in the park on page 183 of the fifth edition of Yellowstone Treasures.

IN THE ANTHOLOGY: You can read two poems by Supt. Norris, “The Wonder-Land” and “Rustic Bridge and Crystal Falls,” in Through Early Yellowstone.

ON THIS WEBSITE: This article continues in Part II. To find out more about geyserite, read The Yellowstone Rock Factory.