A Yellowstone rock in the Smithsonian, Part II

The real origin of the geyserite cone 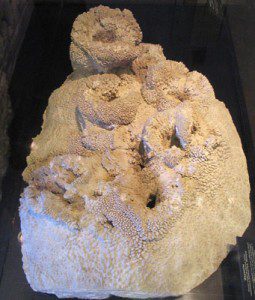 Three experts on the subject of Yellowstone’s geysers weigh in on the provenance of the geyser cone displayed in Washington, D.C. But the evidence is contradictory.

Lee Whittlesey, Park Historian, supplies the following: Geologist Walter Weed, in his 1883 field notebooks, wrote that Superintendent Norris told him he had taken the cone from Vixen Geyser in Norris Geyser Basin. Whittlesey also says that Norris himself, writing in his 1881 report, mentions that the specimen came from “a secluded defile.” Norris Geyser Basin might indeed have been considered secluded in those early days of the park.

Rocco Paperiello, who has written detailed reports of geyser activity at Norris Geyser Basin and elsewhere, does not believe the cone came from Vixen, but rather from Avalanche Geyser, whose official name is Oblique Geyser, in the Geyser Creek Group about 3 miles southwest of Norris Geyser Basin. His reasons for this are:

Here’s how T. Scott Bryan writes about the same geyser in the 2008 edition of his book, The Geysers of Yellowstone: “Avalanche spouts from no fewer than seventeen separate vents, each producing a steady jet with its own character. The vents open among a pile of boulders coated with spiny, pale-brown geyserite.”

Note that Bryan mentions 17 vents—as does the Smithsonian’s label—and says that the form that this geyser’s deposit takes is spiny and the geyserite is pale brown. Moreover, Vixen Geyser is not located in a defile or gorge, but Oblique/Avalanche definitely is (as shown in a picture in Bryan’s book, page 326).

Although Rocket Geyser is pictured in the Smithsonian’s case with the purloined geyserite cone, no one is suggesting that the cone came from that geyser. The minerals department at the museum has no record of where Norris might have got it.

The plot thickens when a few more historical facts are considered.

ON THIS WEBSITE: See the first part of this story: A Yellowstone Rock in the Smithsonian, Part I.

IN THE GUIDEBOOK: Read about the trail to Artists’ Paintpots on page 287 of Yellowstone Treasures, fifth edition.