Everyone who has hiked it, including writers from as far back as 1874, will tell you that for pure enjoyment on a visit to Yellowstone National Park there is no better day hike than the one to the summit of Mount Washburn. For incredible views and unbeatable wildflower displays, this is the hike to take. 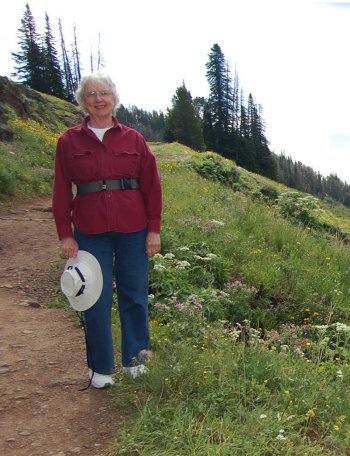 Author Janet Chapple poses among wildflowers at the start of the Mount Washburn trail (2009).

Mount Washburn, 10,243 feet (3,122 m) high, is reached by the figure-eight-shaped Grand Loop Road either from Tower-Roosevelt Junction to the north or from Canyon Junction to the south. The southern parking area at Dunraven Pass is at 8,873 feet (2,704 m), whereas the northern parking area, at a slightly lower elevation, is at the end of the Chittenden Road. Thus, a group of hikers could leave one car at one end and drive another to the second parking area to hike the entire trail, which covers less than six miles (9.6 km) but involves about 1,400 feet (over 400 m) of elevation change.

The view from the top encompasses nearly the whole of the park in every direction. In his book, The Great Divide, nineteenth-century visitor Windham Thomas Wyndham-Quin, fourth Earl of Dunraven, wrote eloquently about his experience climbing Mount Washburn only two years after the park was established. He concludes his 360-degree account by noting that the eye ranges to the far distant “savage” Tetons:

. . . looming huge and indistinct of outline in the blue evening mist, and roams over a boundless ocean of forest, extending from the southwest round to west, unbroken, unrelieved by a single peak, till it rests upon the Madison range. Just beneath our feet a heavily timbered valley opens out into a rolling upland prairie, spreading away on all sides towards the river, while to the south and east the Grand Canyon [of the Yellowstone] cuts through the bases of two mountains.

From this summit you get an excellent sense of why Dunraven called the center of Yellowstone “unrelieved by a single peak.” You can see just where and how large the Yellowstone caldera is, since Mount Washburn rises just above the northern edge of the caldera, and the southern edge is approximately 34 miles away in the far distance.

Near the summit, hikers often see bighorn sheep, and sometimes grizzly bears. Parts of this trail have the most beautiful displays of wildflowers anywhere, especially on the southern slope near the Dunraven Pass trailhead and near the summit. Take the trail in mid July through September to avoid finding patches of snow on the trail. As for time of day, start as early as possible, because thunderstorms are common in the afternoons. But dress in layers and include a poncho to prepare for cold, wind, and rain at any time.

IN THE GUIDEBOOK: Would you like to know which wildflowers you can see on Mount Washburn? See the description and photos on pages 221–24 of the updated fifth edition of Yellowstone Treasures.

IN THE ANTHOLOGY: You can read another excerpt from the Earl of Dunraven’s The Great Divide in Through Early Yellowstone, pages 53-54.

CREDIT: The photo is by Bruno Giletti.