Are There Really Fish Fossils on This Mountain?

Yellowstone Treasures: Home / Nuggets / Are There Really Fish Fossils on This Mountain? 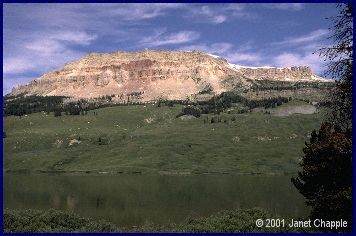 In the Beartooth Range of Montana, just north of Yellowstone and easy to reach on the beautiful Beartooth Highway (U.S. 212), stands Beartooth Butte. Partway down from its 10,500 foot (3,200 m) summit, within the dark red zone of rocks, geologists have found fish fossils as old as 400 million years. That’s a little hard to picture, but this is how they explain it.

Sedimentary rocks containing the fossils were laid down at the bottoms of streams and seas then covering the area. But some 50 million years ago, gigantic forces uplifted the entire area. The layers uplifted were both the sedimentary rocks and the much older rocks below them. Although the younger rocks have mostly been eroded away, enough remain on Beartooth Butte to leave evidence of that very different environment so long ago.

IN THE GUIDEBOOK: Another fascinating geologic enigma in the area just northeast of Yellowstone is described in “The Case of the Wandering Mountains,” page 198 in Yellowstone Treasures, fifth edition.