In contrast with the hydrothermal areas of Yellowstone, New Zealand’s are not set aside in national parks, but are owned and managed by the Maori or, in some cases, by government agencies. Some hot springs are still used by the Maori for cooking, and others have been exploited for geothermal energy. Yet beautiful and accessible spots can still be found in and near the city of Rotorua in the north-central part of New Zealand’s North Island. In April 2003 my husband and I had a wonderful time visiting, and we took some pictures.

The area called Orakeikorako has numerous geysers, but we saw only two or three small ones there in addition to the nicely situated Diamond Geyser. There are several colorful terraces of silica (silicon dioxide) like the second one below, built up along a series of scarps created by faults. 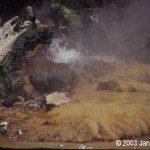 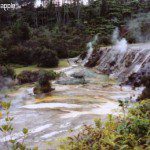 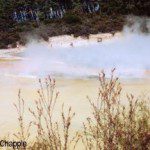 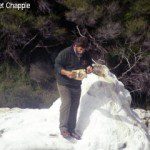 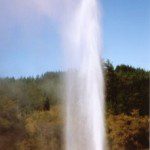 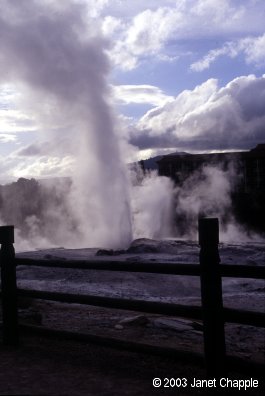 At Whakarewarewa, on the eastern edge of the city of Rotorua, Pohutu Geyser and Prince of Wales Feathers Geyser were erupting, as they do most of the time. Pohutu is the taller one in the picture (left). The area has an extensive sheet of silica, in some places coated with canary yellow sulfur. The several other geysers were not erupting during our short visit.

At Waiotapu, the visitor sees a relatively small part of the 7-square-mile (18 sq km) thermal area. Most remarkable here are the colors and the numerous deep craters similar to the collapse features at Mammoth Hot Springs. Here the craters sometimes contain boiling springs. The colors we saw around these craters and hot springs are not due to microorganisms but to various chemical deposits, including iron and manganese oxides, sulfur, and antimony. In the same general area are large and fascinating mud pools.

It’s impossible for me to resist going into some detail about the Lady Knox Geyser experience. There are rows of benches above the geyser’s gently steaming cone that fill with bus- and carloads of visitors awaiting the 10:15 event every morning. Lady Knox’s cone might be compared to the cone of White Dome Geyser on Firehole Lake Drive near Old Faithful Village, but it’s much smaller. An employee walks up and pours in about three pounds (1.5 kg) of detergent powder (above right).

In a few minutes, the geyser begins to vomit soapsuds, and a little later, lo! the thin column of water bursts from the cone and rises some 25 or 30 feet (7.5-9 m) high. Altogether an amazing performance in the eyes of an old Yellowstone hand trying hard not to be cynical—we’re all aware that this trick is considered destructive and unaesthetic in Yellowstone, besides being illegal. Looking on the plus side, though, it is fun to watch, and this may be the only geyser eruption many travelers in the area will ever see.

My favorite area for its impressive scenic beauty is the Waimangu Valley walk. This remarkable valley is the only significant geothermal surface system formed in historic times anywhere on earth. Although extremely young in geological terms, since it resulted from the volcanic eruption of Mt. Tarawera in 1886, the whole area is already thickly covered with native forest. Along a pleasant downhill walk of a little over a mile, we saw the site of the world’s largest geyser, Waimangu. Between 1900 and 1904, it hurled mud and rocks up to 1300 feet (400 m) in a 36-hour cycle.

More fun to see in the 21st century is Frying Pan Lake (below left), which the literature claims is the world’s largest hot spring. The path takes you along one side of the lake, and near the outlet (below right) are tall colorful cliffs and steam rising everywhere. 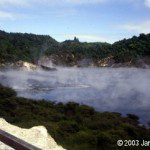 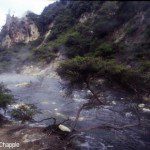 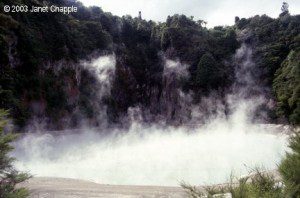 Another impressive sight is Inferno Crater, a huge, round, very hot pool cut deeply into the side of a mountain.

In contrast to the areas set aside for tourists, the thermal activity in Kuirau Park sprang up in a city park in Rotorua amid houses and apartment buildings. The green lawns are interrupted here and there by steaming pools and craters. Just last month, a couple of miles away and within the city, an eruption opened up a large crater. You have to wonder about real estate values in Rotorua!

With thanks to Prof. Ron Keam in Auckland for travel advice and answers to my queries.