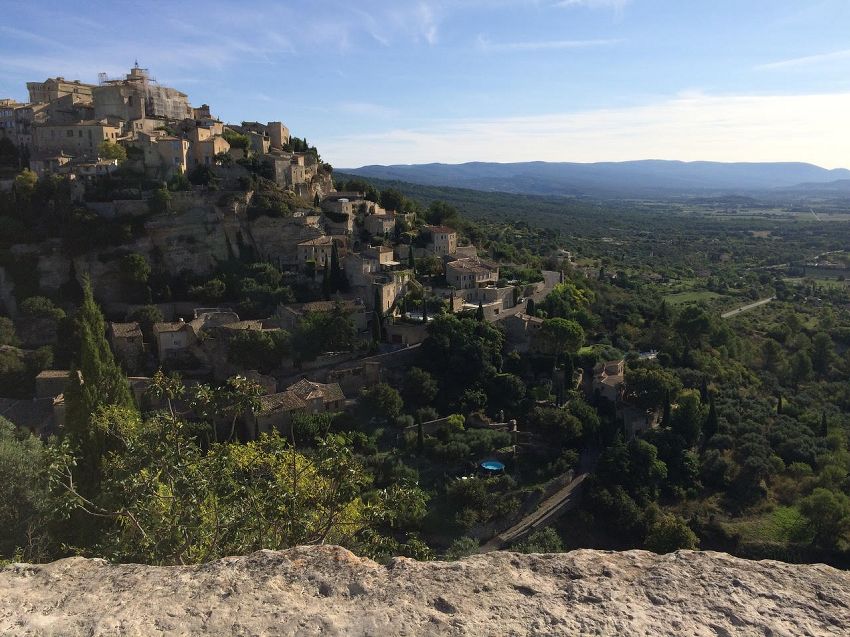 
On our next-to-last day aboard the Emerald we went in two coaches to view the hill town of Gordes (at a distance) and visit the more practically located market town of Roussillon, known for mining ochre in the nearby hills. There some tour members bought produce or souvenirs.

The morning of our last day, we were offered a mini train ride through vineyards and a chef’s demonstration, but I chose to spend a relaxing time reading and visiting aboard our boat and also packing for disembarking the next day. On other leisurely afternoons I played a few hands of bridge, but I never succeeded in getting anyone interested in Scrabble.

After the river cruise, Tauck provided a taxi to take me to my train. I then went to Basel, Switzerland, to visit friends I have known since the 1960s, when they spent three years in Providence, Rhode Island, so that Hellmut could pursue his work in religious studies at Brown University. Siglind and I met through Martin Fischer, a violist who was the conductor of the Brown orchestra, and we played a concert or two as a trio. But the rehearsals I remember best were when Siglind and I were both pregnant (though not showing) with our second child—thus my Beth and her Georg are just the same age. We had hoped to play the Brahms Double Concerto with the Brown orchestra, but that didn’t work out, so instead we played the piece in a private residence with two pianos for accompaniment. 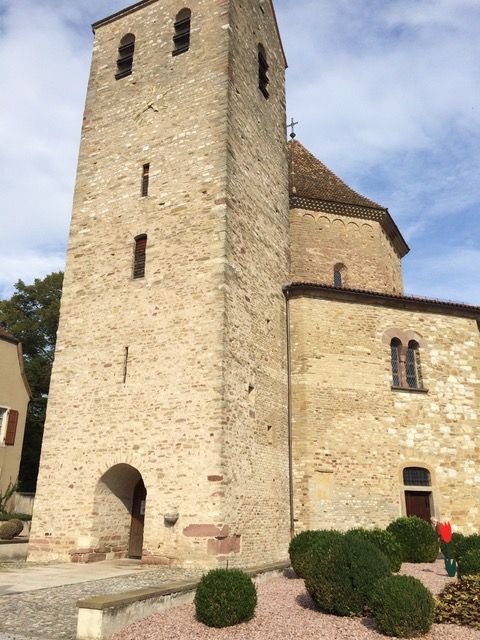 Hellmut took us to view Basel from several perspectives. On another day of my Basel stay he drove us for an hour-and-a-half into France to visit the 11th-century, beautifully restored building called Ottmarsheim Abbey church. Its most remarkable feature (to me) is the perfect octagonal shape of the sanctuary. I wondered how builders who were certainly not engineers so long ago could make the dimensions work out so perfectly. Hellmut, a former pastor, explained the eight sides as being symbolic of the eight-pointed star used in the early church. On our drive there and back, I was surprised to learn that there is no border-crossing stop between countries—the transition from Switzerland to France is not even marked, as far as I could tell.

On the way back to Basel that afternoon, we experienced the strongest rainstorm I’ve witnessed in a very long time. Visibility was so bad that Hellmut had to pull off in a wide spot near the Rhine River. We were rewarded with a rainbow as the rain lessened. That was the only time we saw the river, since someone in his wisdom planted many trees between the road and the river. Strangely (to me), the road is built lower than the river for much of its length.

A memorable evening with very compatible people was spent at Georg and Anna’s house nearby. His brother Tobias and daughter Lily joined us for supper. Tobias is the piano teacher of the now-famous prodigy, Alma Deutscher, who was featured on a recent CBS 60 Minutes program I happened to see. It seems she lives in London, but he teaches her somehow using television (I was told—maybe meaning Skype or something else?). Deutscher has also played violin since a very early age but now, at age fourteen, devotes her time mostly to composing, including an opera, Cinderella.

When it was time to leave, I was concerned about making my way with my heavy suitcase from the hotel to the train station, where I needed to catch a morning train from Basel to the Zurich airport. In booking flights I had thought it would be better to fly home from Zurich than from Basel, but my friends said I could easily have flown out of Basel. At any rate, bright and early the next morning Hellmut was at my hotel with a cab for me, and he had already paid the taxi driver. People on the train were helpful to me getting that suitcase on and off the car I was in, and the hour-and-a-half ride was uneventful (if perhaps unnecessary!).

On my last travel day I was awake early in my New York hotel room, so I wrote in my journal:

9/1, 4:30 am. Sleeping at the “right” hours is a bit of a problem for world travelers. Having been lying awake for an hour now, I’ve decided to quit fighting it and get up—to finish my self-assigned “project.” This project is translating “Les Étoiles” from Alphonse Daudet’s Lettres de Mon Moulin [“The Stars” from Letters from My Mill]. This project is teaching me how spotty my knowledge of French now is: Every other sentence needs a word looked up, so this will have to be completed at home, where I have a good French-English dictionary. But when there I need to take out the cello every day to get my callouses back bit by bit and then devote some morning hours each day to my latest Yellowstone work, researching Mr. Philetus W. Norris. Allons-y! [Let’s get going!]

CREDITS: The photos are by Janet Chapple.