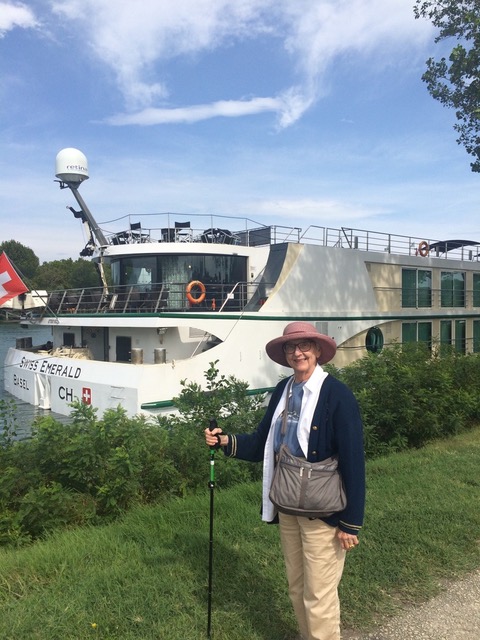 Janet Chapple at the stern of the Swiss Emerald

Thinking it would be pleasant to take a Rhône River cruise with tour company Tauck, a trusted company from a previous experience, I signed on for their late August 2018 trip. On the way I visited my daughter and son-in-law Nancy and Jens in their brand new apartment. My trip started with a three-part flight: San Francisco to Portland, Portland to Reykjavik, and Reykjavik to Berlin.

Efficient trains took me from Berlin to Paris, where my river cruise started officially in the best hotel in town, the International Grand Hotel, close to the Opera. The first treat they gave us was a welcoming dinner at Brasserie Fouquet on the Champs-Élysées. The Tauck hosts also arranged tastings of macarons, olive oils, and chocolates in Paris. How did I manage not to gain weight?

The next morning we took the TGV (rapid train) from the Gare de Lyon to Lyon, where the Rhône becomes navigable. Why can’t the United States have some fast long-distance trains like that?

We spent a day in Lyon, walking and riding in a coach, mainly near the Saone and Rhône Rivers. At an early dinner on the boat, I met two couples named Baker; I joined them and others several times for meals during the cruise. Our cruise ship, the Swiss Emerald, sailed down the Rhône to Arles and back up to Lyon, with different stops. It was very comfortable and smooth going no matter what. In fact, I couldn’t always tell whether or not we were moving without looking out the window. The first night, though, I woke at 3:30 am and realized that we were in a lock. There are 12 locks to maneuver through on this river, mostly with just a few inches to spare on each side of the boat, as the captain explained when a group of us visited the forecastle on a later day.

When the boat docked at Viviers, we all climbed aboard a coach to visit a truffle farm at Grignan, where we saw how the golden Labrador dogs sniff out the truffles from around oak trees. We got to taste a freshly sliced truffle (delicious and slightly nutty!), and I brought home a small bottle of truffle-infused olive oil.

The boat continued down to Arles and the Camargue. Bruno and I had seen part of the Camargue years ago, and I remember wild white horses. The ones I saw this year were not wild but live on a private ranch (or mas) owned by the very hospitable Laurents, who have been there for three generations. We went out in a pair of wagons pulled by a tractor and saw white horses and famous black bulls that take part in bull fighting. In the French version of bullfighting, toreadors don’t exactly fight bulls but simply risk their lives running in the ring with them—from a brief video we were shown.

There was a beautiful, nearly full moon the night of our visit at the Laurents’. Too bad I didn’t have anyone to share it with. That night we had a good dinner served at the Duchy of Uzès property, with two violins and guitar for entertainment.

Heading back up the Rhône, we docked for a day or more in Avignon. Instead of climbing stairs in the Popes’ Palace, some of us rode a small tourist train in relative comfort around the old-city streets and outside the ancient wall.

At the Chêne Bleu winery, we were treated to a short lecture on the local wines given by a young man speaking American English. I took notes on one of my Yellowstone Treasures postcards, the only blank paper I had with me. I really liked the Chêne Bleu Astralabe grenache-based red blend and see that I could buy it here (not cheap!).

Here is what I learned. First, the facts: the Châteauneuf-du-Pape wine country of over 7,000 acres is entirely west of the Rhône, and certain regulations control the appellation. All but one of the wine properties here are family owned, and some of the families date back to the 13th century. Irrigation is not allowed, but the soil is 3.5 meters deep and holds water very well. Gigondas (an appellation Bruno and I learned to appreciate some time ago) is the next territory west of the Côtes du Rhône. Thirteen different types of grapes are grown here and used in the wines. One bit of advice from our lecturer: When you pour a little wine in a glass and then shake it gently, if the residue of wine descends slowly, it is a better wine than if it descends quickly.

CREDIT: The photo is courtesy of Janet Chapple.