The Features of Yellowstone Treasures 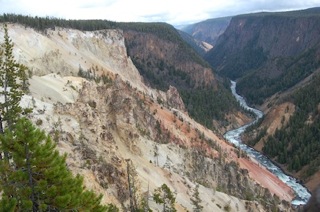 I thought it might be useful to explain to potential readers what they will and will not find in this book. I have consciously tried to avoid most of the subjective comments that many guidebooks provide, such as the best geysers or the best campgrounds. I want to tell readers what is there and where to find things, not convey my judgments about them, except in a few instances when I am clearly biased. Things in the park change quickly, and evaluations of everything can vary widely.

Signposts to Guide You

There are many links between parts of the book that might not be obvious but are there to help you, the reader. These include the colors (see Hints about the Tints for more) that show you what section of the park you are in, the starred best sights, and the red icons for recommended hikes. The key on page 22 explains what all the stars and the icons mean in the road logs.

My list of (admittedly subjective) “Best Sights” in the Introduction, designed for new visitors or those with very limited time, indicates either one star, such as Castle Geyser* in the Upper Geyser Basin, or two stars, such as Inspiration Point,** on North Rim Drive in the Fishing Bridge to Canyon section of the book, with its outstanding view of the Grand Canyon of the Yellowstone.

Near the end of the book is a table of Recommended Short Walks in Yellowstone. Granted, I do not deal with long backcountry hikes; you need a specialized hiking book for those. (Please note that I can no longer recommend two of my previous 58: the Canyon area trail to Point Sublime is not maintained and the Mammoth to Norris area “Service road” walk has been closed.) In the text and headings, these recommended hikes, such as Geyser Hill in the Upper Geyser Basin, are flagged with a red hiker icon.

The outstanding maps in Yellowstone Treasures have been lauded repeatedly by book reviewers and users of the road guide as one of the best features. My friend Linton Brown, a retired civil engineer, modified government maps to be better than what the park gives you when you visit. There are many details you might miss at first, including trailheads, fishing holes, overlooks, restrooms, where the stairs are at geyser basins, and small pictures of animals near where they often can be found.

Because Yellowstone is not a zoo, I cannot predict where you will see the various animals. However, there are also some ideas about where animals might be found in the “Living Things” chapter, a short field guide to some plants and animals of three of Yellowstone’s ecosystems. I work alone in researching the road guide and the changes in the park, visiting frequently. So I cannot update the whole book every single year. Granite Peak Publications publishes updated editions of the guidebook once every three to five years and reprints with revisions in between. Facility opening and closing dates change every year, but I handle this by providing you with general guidelines in the Introduction. Yellowstone has two seasons of rest for the personnel and for the park, times when most of the roads are closed and over-snow vehicles are not allowed in: early November to mid December and early March to mid April.

Unlike other guidebook writers, I try to keep close tabs on changes to the geysers and hot springs from year to year. Let’s take as an example Fan and Mortar Geysers in the Upper Geyser Basin.

In recent years they’ve been relatively inactive and they are never predictable. . . . The joint eruptions may occur every few days in active periods . . .

Picture with caption: Mortar and Fan Geysers put on an exciting show (2001).
From 1997 to August 2005 Fan and Mortar were active more often than not, erupting every few days.

So far this century, Fan and Mortar have erupted every few days during most summers, but with several months-long dormant periods.

Some people get confused about how to use the mileage markings in the road logs in my book. I explain these in the Introduction. They show the distance from an entrance or major junction as well as the distance from the other direction, since a visitor may be traveling either way when consulting the guidebook.

I also “step outside the park boundaries to let you know what to expect as you approach Yellowstone, no matter which direction you’re coming from” (“Resourceful Traveler,” Chicago Tribune, June 12, 2005).

Here are examples of what the road logs help you find inside the park:

CREDITS: The photo from Inspiration Point is by Bruno Giletti; the photo of Palette Spring is by Janet Chapple.