The Yellowstone Hot Spot: History of the Science 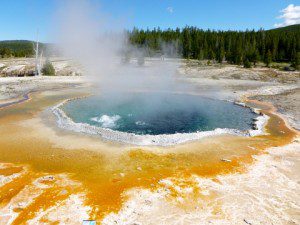 Since the establishment of the park in 1872 and even before, people have been seeking to catalog all the remarkable hydrothermal features and understand what unusual mechanisms underlie the earth’s surface there, as well as how it all works. The first Yellowstone writer with some knowledge of geology was probably Lieutenant Gustavus C. Doane, who headed the military escort for the 1870 semi-official expedition. He noted volcanic phenomena throughout the area, for example in Paradise Valley (along the Yellowstone River north of the park): “Huge masses of trachyte lava, heaped together in every conceivable form, obstruct the narrow way . . .” or at Washburn Hot Springs: “This spring flows periodically; it lies close under a projecting bank of sulphureted calcareous formation. . . .”[1]

The next year Albert C. Peale, who served as mineralogist for all the Ferdinand V. Hayden expeditions to Yellowstone, helped collect specimens and recorded many geological observations in his 1871 field journal [2]. He later wrote extensively about the geology as part of Hayden’s fifth and twelfth official reports.

Hayden had been Peale’s professor at the University of Pennsylvania. After leading his government-funded expedition in 1871, he was instrumental in having the Yellowstone area set aside by Congress. He led two further expeditions that included Yellowstone in 1872 and 1878. Hayden’s own writings included both technical and popular works, including many observations about the geology. According to the authors of “Windows into Wonderland,” an online presentation, Hayden stated that Yellowstone “might be called one vast crater, made up of thousands of smaller volcanic vents and fissures out of which the fluid interior of the earth, fragments of rock, and volcanic dust were poured in unlimited quantities. . . .”[3] Thus, he came close to envisioning the Yellowstone Caldera.

Participating in the latter two Hayden expeditions was William H. Holmes, an artist and geologist, who contributed his detailed report of observations and his excellent drawings to Hayden’s report for 1878, not published until 1883.

Foreign geologists such as Sir Archibald Geikie of Scotland came to this country to compare this newly opened hot spring and geyser region with those of Iceland and New Zealand, and they added their observations. In his 1882 book Geological Sketches at Home and Abroad, Geikie noted:

In the whole course of our journey through the volcanic region we found that the oldest lavas were trachytes and their allies, while the youngest were as invariably basalts, the interval between the eruption of the two kinds having sometimes been long enough to permit the older rocks to be excavated into gorges before the emission of the more recent. Even the youngest, however, must have been poured out a long while ago, for they too have been deeply trenched by the slow erosive power of running water. But the volcanic fires are not yet wholly extinguished in the region. No lava, indeed, is now emitted, but there are plentiful proofs of the great heat that still exists but a short way below the surface [4].

The United States Geological Survey (USGS) published detailed geological studies of Yellowstone in the 1880s and ’90s. At the USGS Arnold Hague and Walter H. Weed wrote about the hot springs deposits, the fossil forests, the different types of volcanic rock, and more. Hague conducted a mapping survey in 1883, the year he became geologist in charge of studies in Yellowstone, resulting in very comprehensive early maps being published a few years later. He recognized the volcanic origins of the Absaroka Mountains and Mount Washburn, of Obsidian Cliff and Mount Sheridan. Hague’s interest in and writings about the park continued well into the 20th century.

Geyser theories and models had existed since the late 18th century. I was fascinated as a small child by a geyser model in the Old Faithful Museum of Thermal Activity (the first visitor center at Old Faithful), probably constructed by Jack Haynes of the famous Haynes Photo Shops and Yellowstone Park guidebooks. Still, no one could really see into a geyser’s throat to study its shape. In 1935 E. T. Allen and A. L. Day produced an exhaustive study of the thermal features [5].

CREDIT: The photo of Crested Pool is by Suzanne Cane.

ON THIS WEBSITE: Find out about more recent developments in geological study in Part II, “The Yellowstone Hot Spot: Modern Science.”