Although many excellent early geologists knew that the area must have been full of volcanic activity, none of them fully realized that Yellowstone sits atop a huge active caldera, or extremely large crater, formed by three huge volcanic explosions. Nor could they say just when eruptions might have occurred. The beginning of such a realization was left to Francis R. “Joe” Boyd, who in 1961 summarized previous geoscientists’ work and his own field and laboratory studies and was the first to suggest that Yellowstone sits astride a caldera [1]. The area does not look like a caldera, either from the ground or from the air, so it took much more research to determine its true nature than did, for example, a much smaller perfectly circular caldera like Crater Lake in Oregon. 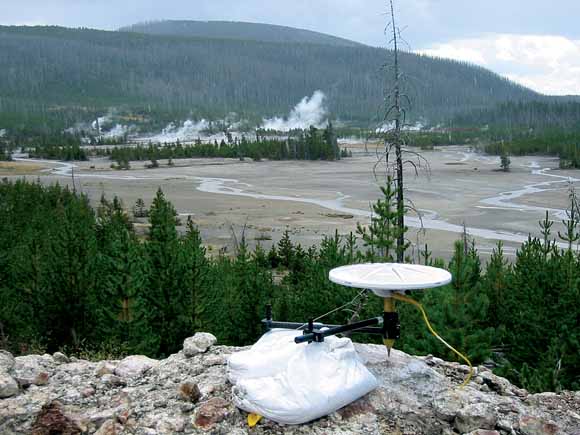 Global Positioning System (GPS) stations like this one at Norris Geyser Basin can detect changes in elevation and horizontal shifts of 1 inch or less per year.

During the rest of the 20th century, geoscientists added to our knowledge of what lies underneath the surface and provides the heat and unusual plumbing needed for all those geysers and hot springs. A tiny camera was suspended into Old Faithful’s vent in 1992 and 1993 and actually recorded what its vent looks like [2]. Seismographs began to be used to register earthquakes of all magnitudes and depths underground. Scientists recorded the “breathing” or gradual rise and fall of the surface in parts of Yellowstone and performed detailed chemical analyses of rock and water samples. New digital instruments were devised to make measurements that trained scientists could interpret, and computer modeling of what is below us became more and more sophisticated.

What does research tell us today?

Renowned geochemist Albrecht “Al” Hofmann assures me that “over the coming years, the currently blurred image of the earth’s interior will gradually sharpen up” [3]. This is largely thanks to the growing network of seismometers that can allow geoscientists to examine and evaluate the arrivals of earthquake signals.

Figure 5. What’s under Yellowstone: Moving plates, mantle plumes, and the Yellowstone hot spot. The cross sections in Figure 5 are approximately southwest to northeast, from the coast of Northern California to just east of Yellowstone Park, and reflect current geoscientists’ thinking about what is now under the park. A shows the formation of the Absaroka Range about 45 million years ago. The oceanic plate is subducting in a northeastern direction under the overriding North American Plate. It has reached deep enough for melting to start and to form the magmas that rose and created the Absaroka volcanoes 53 to 44 million years ago. Most subducting plates dive into the earth at a very steep angle. It is one of the curious things about western geology that this oceanic plate went down at a very shallow, almost flat angle.

Dr. Hofmann agrees with professional geologist Jo-Ann Sherwin that there are at present two prevailing ideas about what is under Yellowstone and how its hot spot originated. Dr. Sherwin created diagrams to show the two possible explanations in the fourth edition of Yellowstone Treasures and then revised the caption for the fifth edition [4]. Figure 5A shows how and when the volcanic Absaroka Range was formed; geoscientists have no disagreement as to how and when this 45-million-year-old mountain range was formed.

But still being discussed are the relatively recent volcanic events—over the past 2.2 million years—and what is under Yellowstone now. In a recent Science magazine article, Richard A. Kerr cites evidence from the EarthScope Transportable Array [5] that “shows extra-hot mantle rock extending down . . . to a depth of 900 km.” Dr. Kerr also says that sharper tomographic imaging (similar to CAT scans of human bodies) is expected in the next five years [6]. Until the data is in, we won’t know whether the hot spot under Yellowstone is or is not a plume, just how plumes act and interact with other features, and why Yellowstone’s caldera seems to “breathe.”

CREDITS: The photo is by Christine Puskas, University of Utah, accompanying the USGS article “Tracking Changes in Yellowstone’s Restless Volcanic System,” available at: http://pubs.usgs.gov/fs/fs100-03/. The diagram is the topmost panel of Figure 5 in Yellowstone Treasures, updated fifth edition (2017), page 306.

ON THIS WEBSITE: See Part I, “The Yellowstone Hot Spot: History of the Science“ for early research.

IN THE GUIDEBOOK: See pp. 306–7 of Yellowstone Treasures, updated fifth edition, for the rest of the diagram showing the two prevailing ideas about the Yellowstone hot spot.