Although many of the rocks you see in the world were made millions or even billions of years ago, in Yellowstone National Park, two kinds of rock in Yellowstone, geyserite and travertine, are forming right now. You can practically watch it happen. 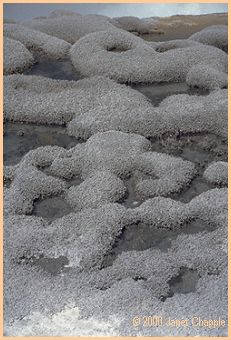 Geyserite is the most common of these rocks. It is formed wherever relatively alkaline hot springs percolate out of the ground. The photo shows geyserite at Crater Hills Geyser. Some other places to see geyserite are Upper Geyser Basin (where Old Faithful and Castle geysers are located) and the Fountain Paint Pot area in Lower Geyser Basin.

The process of building geyserite deposits starts when hot water dissolves silica from underlying volcanic rocks. When the water reaches the surface as hot springs or geysers, it cools, and geyserite (hydrous silicon dioxide) forms. It’s chemically similar to opal.

Shell Spring, below left, is actually a small geyser. When it is active, it is one of the most engaging and easy to watch features in Biscuit Basin (a separate part of Upper Geyser Basin).

Look closely at the two closer views of Shell Spring (below middle and right) to see the biscuit-shaped geyserite knobs for which this geyser basin was named. The photo to its right is a close-up of the geyserite deposits at the crater’s edge seen in the left middle ground, and the next photo after that is looking still closer. 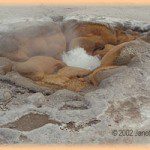 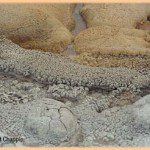 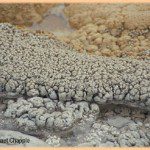 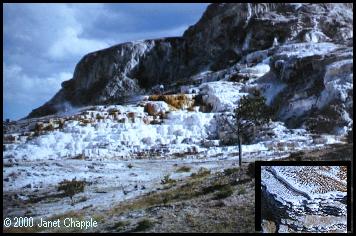 Travertine is another rock that’s forming now. It is relatively rare in Yellowstone, but it makes up the Mammoth Hot Springs terraces, near the park’s North Entrance.

The picture shows Minerva Terrace as it looked in 1997. The inset photo in the corner shows the travertine terracettes in detail. Minerva has not been active in the twenty-first century.

Travertine is made of calcium carbonate, which the hot spring water dissolves from the limestone that lies below Mammoth. How the limestone got there is itself an interesting story.

Over 300 million years ago (now we’re into geological ages!) this area was covered by shallow seas rather than by mountains. Living in the seas were innumerable marine organisms with shells. When they died, their shells gradually became cemented together to form the limestone.

CREDITS: The two photos of Minerva Terrace are by Don Forsyth; all other photos on this page are by Bruno Giletti.

ON THIS WEBSITE: Read Are there really fish fossils on this mountain? to find out more about the time when the Yellowstone area was covered by shallow seas.

IN THE GUIDEBOOK: To learn about where both geyserite and travertine are forming in Yellowstone, see pages 63 and 291 of the fifth edition.