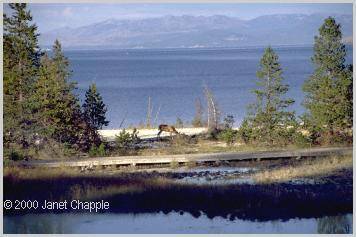 Yellowstone Park’s most beautifully situated hydrothermal area is West Thumb Geyser Basin. Reflecting the different times of day and seasons of Yellowstone Lake and the Absaroka Range of mountains beyond, West Thumb’s hot pools rest in a tranquil and unique spot.

The few geysers this geyser basin actually has are usually not predictable. Lakeshore Geyser was active in the early 2000s. It’s so close to the shore that for much of the year it stays under water. Then there is Twin Geysers, which sometimes erupted to 100 feet first from one crater, then from the other—but that occurred mostly in the 1970s. Lone Pine Geyser erupts once or twice a day out to the north of the main geyser basin. Its namesake tree fell into the lake several years ago. A tall and frequently erupting geyser appeared in this geyser basin several years ago, but that one, Hillside Geyser, which used to erupt to around 70 feet (20 m) about once a day, has been dormant since 2006. 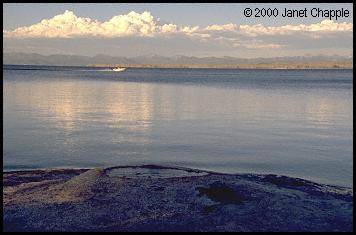 Geysers may be rare here but the various hot springs are well worth a visit. Historically famous is Fishing Cone (right), now sometimes submerged in the lake. In early park days, the cone was a spot where fishermen would stand to catch a cutthroat trout and cook it immediately in the hot spring—a great way to have fresh trout, but an activity that’s no longer allowed.

Hot pools in many shades of blue are sprinkled throughout West Thumb Geyser Basin. Seismograph and Bluebell Pools are side by side (below left) but may show different colors. They differ from each other in temperature.

Black Pool (below middle) was clearly not black in the last few years. In 1991 it became very much hotter than before and erupted, killing the bacterial mats, whose oranges and browns had combined with the usual blue of the water to make the pool almost black. Now Black Pool is often a lovely blue or green and is gradually cooling. 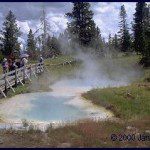 Seismograph Pool, with Bluebell Pool behind it 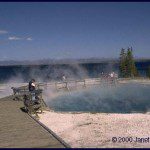 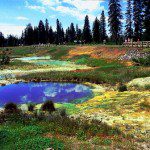 
Two lines of pools with varying shapes, sizes, and temperatures make up the center of the basin. The upper group are the Painted, or Mimulus, Pools (above right).

CREDITS: All photos on this page are by Bruno Giletti.
ON THIS WEBSITE: You can find out about hydrothermal features in other basins in Hot Springs and Pools of Many Colors.
IN THE GUIDEBOOK: West Thumb Geyser Basin is described on pages 137–43 of Yellowstone Treasures, fifth edition.