Continuing from Winter in Yellowstone, Part I . . . 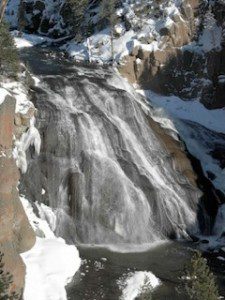 We switched to a fleet of snowcoaches for the trip to Old Faithful. There were more than eighty people in my group, which started the tour on January 8th; a similar number were in the January 6th group. Before reaching Old Faithful we only had time to stop at Gibbon Falls and Fountain Paint Pots.

The park now sports four or more types of snowcoaches. Our driver told us that the park roads now need grooming much less often than when so many snowmobiles used them each day. (The current limit is 318 per day, but I have a feeling that not more than half that number is entering each day this year.) 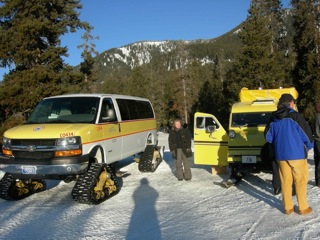 Two kinds of snowcoach, the Mattracks on the left and a much older (and rougher-riding) Bombardier.

That evening in the Old Faithful Visitor Education Center we heard writer Dayton Duncan speak. He began with a short video made very recently by his collaborator Ken Burns, who gave us a moving apology for not joining us on the tour, due to his being grounded by his doctor for kidney stones. Duncan himself gave an emotional talk about his experience with and love for Yellowstone—the only drawback being that we were required to sit in the auditorium for one and three-quarters hours to hear it. That was the evening when in short order I got to meet Duncan, Chuck Tauck, and Yellowstone Superintendent Dan Wenk, who graciously listened to and agreed with my spiel about the need for a shuttle system on the west side of the park. That was also the night when tour participants from both groups received copies of Yellowstone Treasures, courtesy of Granite Peak Publications. The next day I autographed quite a few of those copies.

My thrill on Thursday at Old Faithful was getting a private snowshoeing lesson and tour down along the Firehole River, up through the snow-packed cabin area, and into the geyser basin. I loved the whole thing; snowshoes give me much-needed security with those sharp cleats on the bottom. 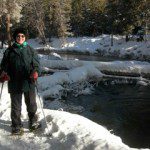 Janet snowshoeing by the Firehole River 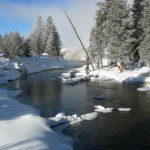 Firehole River from the bridge


It was a small disappointment that night and the next, when I tried to view the stars and learn some new constellations. The first night I wasn’t properly prepared for the cold and did not go far enough from the outdoor lights, and, on the second, I was all set to lie on Old Faithful Geyser’s benches and observe, but a wispy cloud cover came in within five minutes of arrival there and covered the stars completely.

Our next day’s snowcoach trip to see the Canyon and Falls rewarded us, as it has the other times I’ve taken that excursion. There was less of an ice cone on Lower Falls than in 2006, but Upper Falls had ice on both sides and just a trickle of water down the center.

An unusual sight for midday was the two beavers we glimpsed feeding along the frozen edge of the Yellowstone River. A bit further up the river in the Hayden Valley, we saw five graceful trumpeter swans. 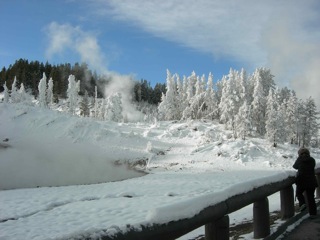 I loved the rime-covered trees at Mud Volcano. We could not take the time to walk around there—nor at West Thumb Geyser Basin. The frequent need to move on was the only drawback to being part of a large tour rather than going through the park on my own.

Our lecturer that evening was the incomparable Gerard Baker (or “Yellow Wolf”), a very tall Mandan-Hidatsa Indian with gray braids, who has served as superintendent of several national parks and has been influential for many years in helping Native American Indians receive their due recognition in parks and elsewhere. He told us anecdotes of his early life and gave the most moving lecture I’ve ever heard, reducing me to tears for a good part of it. He was totally approachable, and I visited briefly with him and his wife Mary Kay.

Our last morning was spent in snowcoaches from Old Faithful to Flagg Ranch, just outside Yellowstone’s southern entrance. There we transferred to the same Karst Stage motorcoaches (brought by our drivers around the west side of Yellowstone on plowed highways) for the rest of the way to Jackson and the Spring Creek Ranch.

Jackson Lake was totally frozen over—as was Yellowstone Lake. We stopped along Grand Teton National Park’s outer road to view the stupendous Tetons. The afternoon was free for some tour members to wander around Jackson’s shops and for others of us to relax at Spring Creek Ranch. 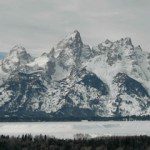 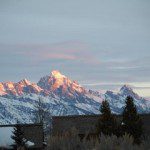 The Tetons as seen from the Spring Creek Ranch (Linda Murphy, 2012) 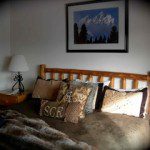 My bedroom at Spring Creek Ranch

That evening we were bused to the National Museum of Wildlife Art, where we had wine and hors d’oeuvres and (too little) time to appreciate the galleries’ artworks. An excellent parting banquet was served in the large central hall of the museum. I got to meet two young directors of the nearby Murie Center, Jon Mobeck and Crista Valentino. They spoke to the group briefly about their quite recently established center at the former home of Olaus and Mardy Murie, a center committed “to the enduring value of conserving wildlife and wild places.”

And the tour was over.

EXPLORE MORE: Here are the websites for Spring Creek Ranch, the Murie Center, and the National Museum of Wildlife Art.

CREDITS: The view of the Tetons from Spring Creek Ranch is used with permission from tour participant Linda Murphy. The other photos on this page are by Janet Chapple.
Copyright 2012–13. All Rights Reserved.