Yellowstone Park and the Quest for the Origin of Life, I

Yellowstone Treasures: Home / Nuggets / Yellowstone Park and the Quest for the Origin of Life, I 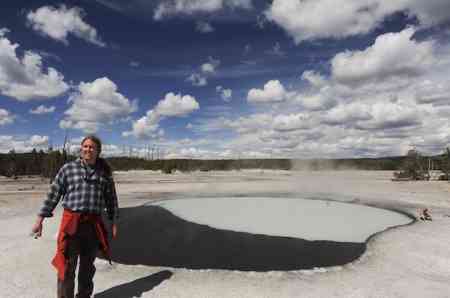 Glancing at Eric Boyd’s CV, you can get an idea of how he used his PhD in microbiology to reach his assistant professor rank at the age of thirty-four. He has appointments in both the Microbiology and Immunology and the Chemistry and Biochemistry Departments at Montana State University in Bozeman. In addition, he is an investigator in their Thermal Biology Institute and the NASA Astrobiology Institute’s (NAI) University of Wisconsin Astrobiology Research Consortium. Eric’s long list of accomplishments includes receiving an NAI Postdoctoral Fellowship, a NASA Early Career Award, several awards for outstanding research, appointments to the editorial boards for three journals, and amassing a list of about 60 publications. Still, he willingly took the time to explain his research into the origin of life to an inquisitive reporter.

Brought up in Iowa by parents whom he credits for ensuring their children got good educations, Boyd remembers visiting Yellowstone National Park as a 5-year-old and again in college. He “became mesmerized by the field of microbiology” as an undergrad at Iowa State University and has never looked back. The microscopic cells of bacteria that cause diseases in humans, other animals, and plants hold the attention of many microbiologists, but Boyd uses bacteria and archaea as agents of discovery, applying evolutionary tools to understand the metabolic processes that almost certainly supported the earliest forms of life on earth.

“There was a period of time some 3 to 4 billion years ago when life was dependent on nonphotosynthetic forms of energy,” Boyd told me. That is, living things could convert chemicals in their environment via means other than the Sun’s radiant energy. Boyd and his colleagues have recently begun to answer exactly what chemicals are involved and how microorganisms (also called microbes) can use them.

“We’re a big team with different research interests but focused on one theme: life that lives off the products of water-rock interactions. Anywhere there is hot water from 73°C [163°F] to boiling, the life is not photosynthetic,” he told me. Yet a multitude of organisms do live in these very hot environments; they are called thermophiles, and above 80°C, hyperthermophiles. Boyd’s team and many other microbiologists and biochemists sample and analyze interactions between and among microbes from Yellowstone hot springs.

Boyd traces microbes back through time to determine what evolutionary stages they have passed through. He likens this work to what geologists do when they discover a region’s different geologic ages and formations. Similarly, on road trips you may see signs telling about the different geologic ages you are passing through. (Some day Boyd and his colleagues will have a similar microbial chart back to the beginning of life.

A complete inventory by the Research Coordination Network of Montana State University found about 10,000 features of all types and sizes—hot springs, geysers, steaming vents called fumaroles, and mud pots. Scientists discover an astounding variety of microorganisms in and around them. Many of the park’s thermal features are convenient to roads or maintained trails yet preserved in their natural state, in contrast to Iceland and New Zealand, where thermal features have been tapped for energy. 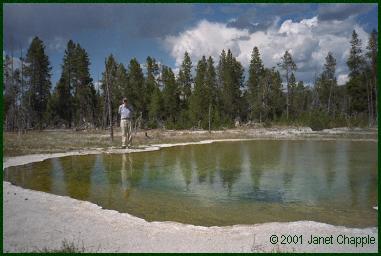 A microbiologist who pioneered the collection of Yellowstone microbes is Thomas Brock of the University of Wisconsin at Madison. Brock and undergraduate assistant Hudson Freeze collected a tiny organism in 1966. They took it from 73°C Mushroom Pool, named long ago either for a plant growing in it or because the pool has the appearance of a mushroom. The microbe was a bacterium, named by Brock Thermus aquaticus (or Taq).

Scientists found that this bacterium can thrive in the laboratory, even in boiling water. Later, purification of one of its enzymes, Taq DNA polymerase, in turn led to its use in a world-changing process. Taq polymerase is such a stable enzyme that its activity is not destroyed by very hot temperatures. This property allows it to be used to conduct repeated cycles of DNA synthesis reactions, thus producing large amounts of DNA for genetic sequencing from a minuscule sample. The laboratory technique called a polymerase chain reaction (or PCR) is the basis for many subsequent laboratory analyses of DNA samples.

DNA sequencing also led researchers to reorganize the tree of life (see the diagram) into the present three-domain system, in which the lesser-known archaea have been found to occupy a separate domain from bacteria and eukaryotes. Although visually similar to bacteria, archaea have unique molecular and metabolic features [1]. Some of these unique adaptations are more closely related to those found in eukaryotes. They have no cell nucleus or cell compartments, and they are particularly numerous in the oceans. 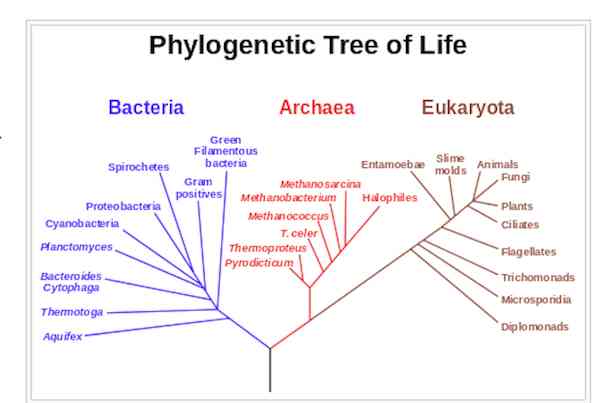 A typical Tree of Life diagram, based on completely sequenced genomes. Notice how all animals, including humans, of course, occupy just one small twig on the large Eukaryota branch.

By 2007 researchers had found at least seven practical applications based on Yellowstone organisms [2], including heat-stable enzymes used in laundry detergents to break down protein and fat stains and an enzyme now being used to clean up industrial wastewater from hydrogen peroxide bleaching processes. Other heat-tolerant microorganisms were being studied at that time to identify enzymes that can degrade alkaline materials, such as some pesticides and explosives. Twenty-eight permits to researchers focusing on park microbes were on file in 2014, according to the Yellowstone Center for Resources.

CREDITS: Top photo courtesy of Prof. Boyd. The photo of Thomas Brock is by Janet Chapple, 1996. The Tree of Life diagram comes from Wikipedia Commons.

ON THIS WEBSITE: This interview and discussion continues in The Quest for the Origin of Life, Part II.

[1] Notes on Chapter 6, “Diversification of Bacteria and Archaea. I: Phylogeny and Biology,” Evolution. Available at http://www.evolution-textbook.org/content/free/notes/ch06_Notes.html