Yellowstone Park and the Quest for the Origin of Life, Part II

Yellowstone Treasures: Home / Nuggets / Yellowstone Park and the Quest for the Origin of Life, Part II

Exclusive interview with Dr. Eric Boyd, continued. You can read the first part in Yellowstone Park and the Quest for the Origin of Life, Part I.

Scientists are using a variety of theoretical approaches and experimental means to understand how life might have developed on Earth. Some believe that before there was photosynthesis—which evolved about 3 billion years ago—living organisms may have formed on minerals containing iron and sulfur. This research track (which includes Boyd’s work) follows the so-called Iron-Sulfur World hypothesis, in which the only raw materials available were elements sealed into rock, water, and an atmosphere poor in or lacking oxygen.

Boyd (at left) explained this research orientation: “We are trying to understand the metabolic processes that supported the earliest forms of life on Earth. There was a period of time when life on Earth was dependent on nonphotosynthetic forms of energy—that is, life then did not depend on energy from the Sun. It was dependent on inorganic chemical forms of energy, minerals. We focus on how life extracts energy from its environment in the absence of photosynthesis. Yellowstone happens to be an ideal place for asking that question.”

Maybe lightning or some such natural force triggered chemical transformations on Earth before life existed here. Research by Stanley Miller and Harold Urey in the 1950s tested the possibility of lightning’s contribution. The later implications of this theory are explained in a recent issue of Harvard Magazine [1].

Those researchers who follow the iron-sulfur path of inquiry are indebted to the ideas of a Munich patent lawyer with a chemistry degree, Günter Wächtershäuser. He proposed in a paper in 1988 that early life may have formed on the surface of iron-sulfide minerals through a long series of chemical events or reactions that probably occurred at extremely high temperatures, such as those found in volcanic areas like deep-sea vents (“black smokers”) and hydrothermal basins.

Another origin of life view some scientists are pursuing is called the RNA World. This hypothesis proposes that self-replicating ribonucleic acid (RNA) molecules were precursors to current life, which is known to be based on deoxyribonucleic acid (DNA) along with RNA and proteins. Observe that even if current life descended from RNA molecules, the Iron-Sulfur World may have preceded it—or it could have been some other sort of world not as yet projected by researchers.

According to Eric Boyd, it is unlikely that either the Iron-Sulfur World or the RNA World views are exclusively or completely right. “Rather, it is more likely that organized life is the result of a marriage of these two ideas. This is very difficult to design experiments to test.”

I asked Boyd about the last universal common ancestor (LUCA), a fascinating concept new to me. The term “universal ancestor” seems to have originated with a 1998 article by Carl R. Woese [2]. Woese was also responsible for realizing that Archaea is a separate domain from Bacteria and Eukarya. LUCA has been hotly discussed ever since.

To quote from Woese’s abstract: “The universal ancestor is not a discrete entity. It is, rather, a diverse community of cells that survives and evolves as a biological unit. This communal ancestor has a physical history but not a genealogical one. Over time, this ancestor refined into a smaller number of increasingly complex cell types.” And from Woese’s conclusion: “The ancestor cannot have been a particular organism, a single organismal lineage.” Also, he wrote: “The universal ancestor is not an entity, not a thing. It is a process characteristic of a particular evolutionary stage.”

LUCA is pretty hard for nonscientists to understand, but in a nutshell, it is the most recent common ancestor of all current life on Earth. Boyd admits LUCA is hypothetical. However, he is convinced that the archaeal and bacterial organisms in Yellowstone’s hot spring environments probably branch close to LUCA and are the descendants of very early evolved life.

One of the earliest evidences for life on Earth yet discovered is biogenic graphite, a rock that resulted from the activity of living organisms. Biogenic graphite was found in 3.7-billion-year-old altered sedimentary rocks in Western Greenland in the late 20th century. 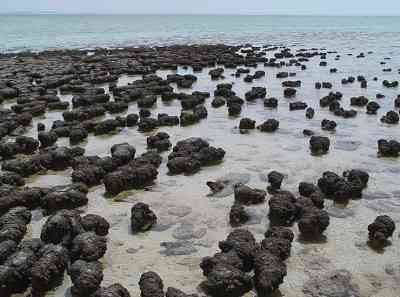 Other evidence from the earliest Earth years was found in late 2013 in fossils of microbial mats in 3.48-billion-year-old rocks in Western Australia [3]. A microbial mat is a multilayered sheet of microorganisms, mainly bacteria and archaea. The mats are large enough to see with the naked eye and can survive moderate physical stresses. These communities of bacteria form on surfaces where water and sediment or rock meet, or between air and rock, between soil and bedrock, and so on.

A cross-section of a 2.3-billion-year-old stromatolite.

The Australian fossilized microbial mats found in 2013 are technically called stromatolites. They may provide the most ancient records of life on Earth. Formations like these build up in limestone (calcium carbonate) and dolomite (calcium magnesium carbonate) environments. Their primary constituent is cyanobacteria, a common type of photosynthetic aquatic bacteria. These bacteria are likely responsible for creating Earth’s original atmospheric oxygen, since they consume carbon dioxide and release oxygen through their metabolism.

This discussion has wandered all the way to Australia, but bacteria builds similar formations, although rarely, in some environments in Yellowstone, such as at Mammoth Hot Springs.

Boyd adds to Earth’s microbial knowledge, others extend it to our solar system

What microbiologists learn about Earth’s microbial communities may be applicable to the discovery of similar forms of life elsewhere, maybe on Jupiter’s moon Europa or Saturn’s Enceladus, or on the planet Mars, or on as-yet-undiscovered planets. With this ultimate goal, the National Aeronautics and Space Administration (NASA) supports four different research programs. Boyd and many other Montana State investigators participated in the NASA Astrobiology Institute’s rotating program from 2008 to 2012. This program is set up to support a long list of research institutions, each for a limited time and overlapping with others.

“NASA is keen on building a network of scientists across the country and the world,” Boyd told me. The National Science Foundation also supports this research, along with several other U.S. organizations. NASA is particularly interested in learning more about extremophiles (microbes that thrive in extreme conditions).

I will mention only one experiment among many being done with microbes in space. This work is based on the panspermia hypothesis—that life exists throughout the universe, distributed by meteoroids, asteroids, comets and planetoids. Due to arrive at Comet 67P / Churyumov–Gerasimenko [4] in November 2014, the European Space Agency’s small lander will investigate the comet for evidence of both active and dormant microbes.

Approaching the study of microbes from yet another perspective, an innovative consortium of international microbiologists has joined together in the Earth Microbiome Project (EMP). These scientists collect samples from around the world. In soil alone there are trillions of microbes in every kilogram (2.2 pounds), and soil is only one place to sample them. Three other good sources are aquatic habitats, various places in the human body (for example, gut, skin, mouth), and other animals. They find extremophiles in the most surprising habitats: very salty bodies of water like Mono Lake in California, glaciers, deep-sea volcanic vents, and hot springs in Yellowstone.

All the EMP’s data is being made public but is extremely difficult to analyze. As Dr. Janet Jansson of the Lawrence Berkeley National Laboratory points out in an online interview [5], one can usually see nothing smaller than cells in a microscope. Thus, genetic sequencing must be done on each cell to identify it—obviously, an immense project. Jansson also said that EMP researchers are now looking at the first 10,000 samples they have collected, analyzing and comparing them and looking for patterns.

The huge field of microbiology is going to be newsworthy for years to come. Eric Boyd with his Yellowstone microbe research is like a small kid entering an immense toy store with aisle upon aisle of fascinating things to play with and no limits on what he might do with them or where they might lead him.

CREDITS: Top photo courtesy of Prof. Boyd. The photo of stromatolites in context at Shark Bay is by Paul Harrison. Both stromatolite photos are available from Wikimedia Commons.