Where to get Yellowstone Treasures this month

Categories: News
Tags: Amazon.com, guidebooks, readers, Yellowstone Forever
Comments Off on Where to get Yellowstone Treasures this month 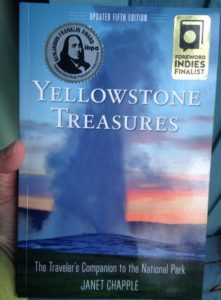 Until recently, two of the most popular places for you to buy a copy of Yellowstone Treasures: The Traveler’s Companion to the National Park were inside the park itself and from Amazon.com. But this year Yellowstone Forever has apparently made the decision (temporarily, we hope!) not to carry any guidebook they don’t publish themselves. The admirable nonprofit runs ten stores in the park, including a fairly big one at the Old Faithful Visitor Education Center and one at the Bozeman Airport. While you might look to snag a copy of our guidebook, with its sights arranged by road, when you first arrive in the park, the Yellowstone Forever stores don’t currently seem to stock any of the big guidebooks, perhaps to avoid appearing to favor one publisher over another.

Also, Amazon is having problems this week with distribution. Alhough they recently placed a large order from our distributor, yesterday the print book listing at Amazon read “Temporarily out of stock,” and today the message was “In stock on July 10, 2018.” (If you’d like the Kindle version, you can still buy that.) This Publishers Weekly article explains that Amazon is having trouble managing the truck deliveries from suppliers to their warehouses. And one reason for that might be their preparations for “Prime Day,” which is when Amazon Prime members see lower prices on many products. Prime Day is supposed to start at midday on July 16 this year.

Our advice to you is to buy a copy before you go. If you want it right away you have plenty of options:

I’ll leave you with a thought from reader Robert D. Rice, who wrote in his 5-star Amazon review on May 15, 2018: “Best guidebook I have ever read. No ambiguities, the descriptions and directions are very detailed. So many options available at every location I wish I had time to do it all. I love the focus on geology and I will enter Yellowstone almost like an old hand having studied this amazing book.”

Search the book for your name or interest

Categories: History, News, Through Early Yellowstone
Tags: Amazon.com, history
Comments Off on Search the book for your name or interest

Dear readers,
Did you know that Through Early Yellowstone describes a wide variety of people and places? You can now use the Look Inside feature on Amazon.com’s Through Early Yellowstone page to find just what all it covers. Among all the surnames of the writers collected in the anthology or people otherwise mentioned in the book may be your name or the name of someone you know or admire. Names you could look up include ones for just about every letter of the alphabet. 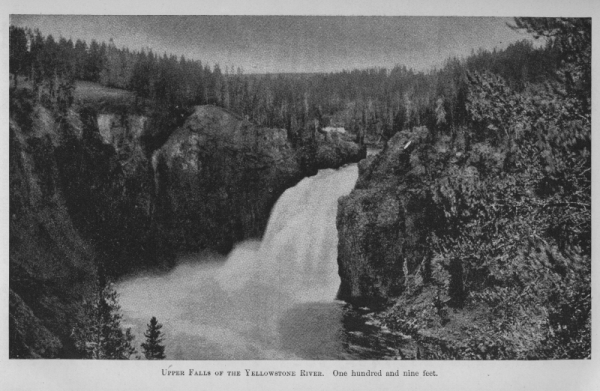 Upper Falls of the Yellowstone River

Update on Through Early Yellowstone Janet’s next book will be published in time to celebrate the centennial of the National Park Service. She has carefully selected and annotated travel stories from the first five decades of the park. The crown jewel of the book is the set of 1884 watercolors by Thomas H. Thomas, shown here for the first time outside Wales. We feature his image of Grand Prismatic Spring on the cover. Click on this picture for a larger image, and you can see two men and their horses standing close to the hot spring before any boardwalk was built.

There have been many steps along the way, beginning with Janet’s several years of research at historical societies, public and university libraries, and the Yellowstone Heritage and Research Center Library. In 2014 Granite Peak Publications acquired the book and decided to issue it as a trade paperback. We sought feedback from friends and publishing experts, including sending out a survey that helped us switch from the tentative Magnificent Playground to the current title. The stories are told by active explorers and adventurers, so we wanted to express that in the subtitle, “Adventuring by Bicycle, Covered Wagon, Foot, Horseback, and Skis.” Our designer, Vicky Shea of Ponderosa Pine Design, is working on the second stage of page creation, altering image sizes and putting in the corrections that our proofreader found.

Already Amazon.com is offering pre-orders of the book. To find out more and browse the table of contents, go to the book’s web page, ThroughEarlyYellowstone.com.

Do you have questions for us about this new book? Be sure to comment below or use our contact form.

Since we published the first edition in 2002, Yellowstone Treasures has received 84 reviews on Amazon.com. Of those, 81 are four- or five-star reviews; one each received three, two, or one star. Barnesandnoble.com shows six four- and five-star reviews, two 3-star, and one 2-star, most with no text.

Naturally all this positive response made me happy. My main goal in writing such a detailed guidebook has always been to provide visitors with a really useful book. The occasional constructive suggestions offered online and in person by my readers contributed to the gradual improvements that my editor Beth and I have incorporated in the next two editions.

An article called “The Best Reviews Money Can Buy” caught my eye in the August 26 New York Times Sunday Business section. It seems an enterprising man named Todd Rutherford found a way to capitalize on selling positive online reviews to self-publishers. He wrote some himself and hired others to write them—you could buy reviews in bulk: $99 for one or $999 for 50. The system worked splendidly for a few months, but Google began to limit Rutherford’s ads and then Amazon cut back on the reviews, and Rutherford went into other ventures.

To my way of thinking, paying for reviews is unethical. I had qualms about asking one friend who had used Yellowstone Treasures in the park to write a review. It has been great to have feedback about what can be improved. Tomorrow I’ll post my reactions to the very long and detailed one-star review the book received earlier this month.

Well, folks, Amazon.com seems to have realized they’d made an error, so today (or yesterday?) they returned the price of the Kindle version of Yellowstone Treasures to $9.99. Like it or not, all publishers and authors are required to toe the mark with Amazon.

If you read my February 25 post or tried in the past few months to buy a version of Yellowstone Treasures for your Kindle, you know that it was not being sold on the Amazon website. But as of earlier this week, an agreement between my distributor, Independent Publishers Group, and Amazon has brought it back. The Kindle version now costs their standard $9.99 rather than the $14-something you would have had to pay for it previously. As publisher, I can live with that. I thank IPG for holding firm when Amazon became unreasonable, but I also thank both of them for arriving at a compromise.

(Added 14 hours later) Oops! I see that now the Kindle price is $11.96. Well, that’s half the price of the paperback. Trouble is, you don’t get the 37 maps or any of the color in the pictures or design elements in the book. With the next edition I will have a Kindle Fire version, which should remedy that problem.

[2012 post. 9/13/13 update: The Kindle Fire version of Yellowstone Treasures has been out for over a month now, and it looks great!]

On February 25th [2012], I published a blog post about the removal of all the e-book titles distributed by Small Publishers United and Independent Publishers Group from Amazon’s online store. This included Yellowstone Treasures, which had been bought as an e-book by some 650 readers.

In the list of e-book formats for which Yellowstone Treasures is still available, I included Google Books, but, in reality, we have just this month begun making the guidebook available in that format. If you don’t want to carry a one-and-a-half pound book with you to the park, consider buying it as a Google e-book or other electronic book.

I am sorry that Amazon has not so far relented their unreasonable decision that has cut back on the books available for people who have Kindles.

Visitation to Yellowstone Park set a record of 3.29 million in 2009, despite the recession and last winter’s relatively low number of snow-time vacationers. According to the Billings Gazette (disclosure: that’s my hometown newspaper):

The previous record for visitation, 3.15 million people, was set in 2007. The numbers in 2009 were 7.5 percent above 2008’s 3.06 million visitors and 4.6 percent above 2007.
The increase in park visits could reflect free access on two summer weekends, attention from a new PBS television series on national parks and relatively low gasoline prices.

Just for my own edification, I compared last year’s sales of Yellowstone Treasures with those of 2007 and 2008 and found that 41% more books were sold in 2009 than in 2007 and 38% more than in 2008. In addition to the factors mentioned in the Gazette article, I attribute that gratifying increase to a step-up in media publicity about the book and to word-of-mouth—especially when Amazon.com chose to include a copy of the guidebook in their sweepstakes week that offered a Yellowstone National Park tour and thousands of dollars of Canon photo equipment.

The best news is that 2009 is proving to be a record year for Yellowstone visitation. Most roads are now closed, and snow pack is beginning to accumulate in many parts of the park, but through October the number of people visiting the park has never been higher. More than 3.2 million visitors entered the five gates from January through October. The National Park Service attributes the steep rise in visitation this year to people realizing that national park visits are a good value and to fuel prices remaining lower than in 2008. Three summer weekends when entrance fees were waived may also have contributed to the higher numbers.

This high visitation rubbed off on sales of Yellowstone Treasures, which, I’m happy to say, have never been better. Comments like these may have helped:

We have just received our copy of your wonderful book in the mail and we cannot put it down! My husband and I are planning our 4th trip to Yellowstone for this Fall. . . . We are so excited and even more so now that we have found your wonderful resource which will accompany us every step of the way.

The book was a magnificent guide that allowed my family (wife, two little girls ages 5 and 7, and their grandparents), to maximize every moment in this wonderful place. Incremental details, ease of info lookup, summary on prioritizing sites, lodging, etc. This book is just like a non-electronic GPS with supporting info, as the roads are relatively simple in the park. Our copy is treasured and tattered. . . .

Everything my traveling companions and I could want to know or need to know about the area within Yellowstone was within the nearly 400 pages of this book. The next time my friends and I go back to the park, we certainly will be making use of Ms. Chapple’s work. If you are planning to visit Yellowstone National Park, I strongly advise you to get a copy of this book beforehand yourself and keep it on hand as you traverse the park.

And I was delighted to find that Amazon is including a copy of Yellowstone Treasures with the Canon sweepstakes they will hold November 9-15.

Chalk up one more for Yellowstone: Fodors.com has a forum where someone asked whether Yellowstone or Yosemite would be a better choice as a vacation spot for taking children 11 and 13 next summer. Two of the comments were: “Yellowstone has such variety in natural settings, unique environments, and wildlife . . . “ and “There are plenty of ‘walks’—rather than hikes. Places where you park your car and walk about one-half mile along a nice path. . . . Don’t think of this trip as a drive-by Disney-type experience.” I can second that!