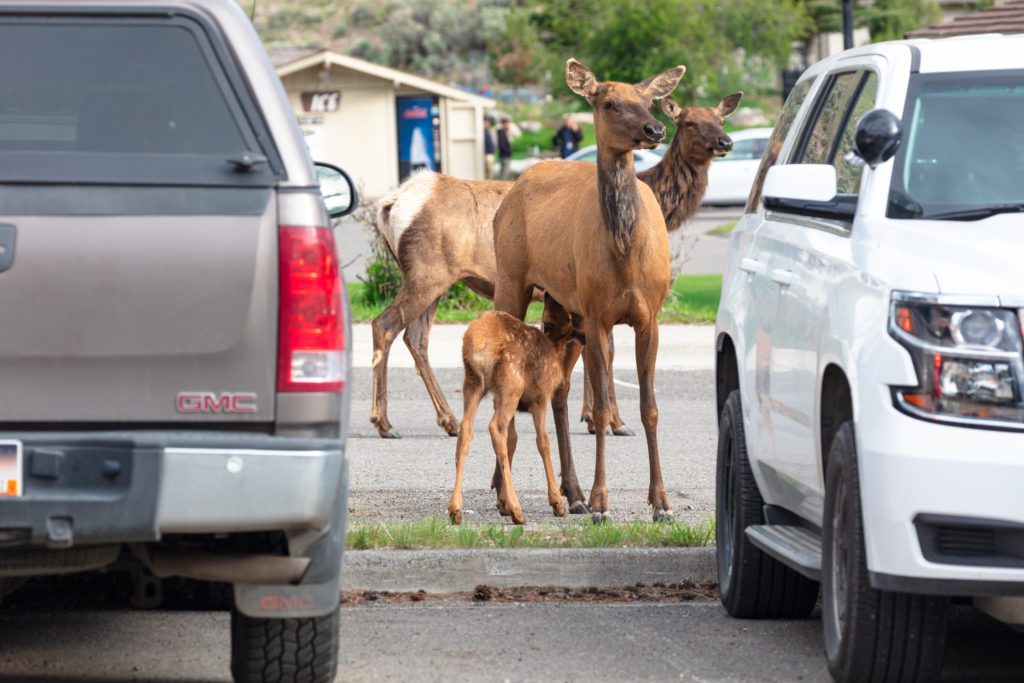 Roads in the lower loop of Yellowstone National Park opened to the public at noon yesterday. Certain restrooms and gas stations also opened up. That means people can drive through the East and South Entrances (from Cody and Jackson, Wyoming), but the popular North and West Entrances are closed.

Keep in mind that the restrictions may seriously hamper any trip you are planning. Please peruse the chart on the NPS “Current Conditions” page carefully. Lodge rooms and sit-down dining will not open in all of 2020; cabins and grab-and-go eating or picnics will be the way to go. It’s possible to try to reserve cabins at Old Faithful starting on June 8, or at Lake or Canyon starting on June 17 or 19, respectively. Camping is possible at Madison from June 15th, as well as in other campgrounds.

This being Yellowstone, the warning out today is look out for those aggressive cow elk!

ALSO, today Gov. Bullock of Montana announced that the state will move to phase two of reopening on June 1. The good news is that “the 14-day travel quarantine for out-of-state travelers and residents arriving from another state or country to Montana for non-work-related purposes will be lifted” on that date. And restaurants can reopen at 75% capacity with social distancing. But the bad news for travelers is that for phase two they still have the same guidelines to minimize nonessential travel. In particular they warn that vulnerable populations and the elderly should continue to stay home.

This year, careful planning and accepting that you can’t just get in your car and go are more important than ever.

Someone on the website Quora just asked about visiting Yellowstone in October, so here’s what I came up with while surfing the National Park Service website for Yellowstone:

All campgrounds close in September, except the one at Mammoth Hot Springs, which is open all year.
Almost all roads are open until November 7; Dunraven Pass and Beartooth Pass close on October 11.

Since the weather always turns cold and snowy more and more during October, visitors need to be prepared to dress warmly and could need snow tires in some areas. All thermal areas and most wildlife can be seen (bears are just beginning to think about hibernating), but visitor center hours are limited, some dining facilities are closed, and ranger programs have already ceased in September.

Janet celebrates her 75th anniversary in the park Yellowstone bus at Gallatin Camp way station, 1937. Janet is on the right, her sister Joan is in the center, and her cousin Judy on the left.

The summer of 2014 marks 75 years since author Janet Chapple first spent a summer season in Yellowstone. To celebrate, YellowstoneTreasures.com will serialize excerpts from her memoirs of her experiences from 1939 to 1942.

Residing in Billings, Montana, my parents both made their livings as music teachers when I was a small child. In the summers they found jobs near Yellowstone Park, including managing the 320 Ranch in the Gallatin Canyon one year and working in the office of the Gallatin Gateway Inn another. Around 1937 and for either one or two summers, they ran the “Gallatin Camp” way station to service the park buses that brought Yellowstone visitors from Gallatin Gateway Inn to the West Entrance.

From looking through the Yellowstone Park Company payroll books held at Yellowstone’s archives, my sister Joan Orvis and I learned that my father, L. Worth Orvis, was employed as Assistant Transportation Agent for Old Faithful Inn in 1939, and that he advanced to be Transportation Agent in 1940. We were surprised to be reminded that we stayed at Old Faithful, not just in 1941, but also in 1942, when the war had begun to cut drastically into people’s summer vacation habits.

I cannot remember which events and impressions took place in which years, except that 1939 was quite different from the others. I believe we stayed in one of the tourist cabins that year in the group of them that were east and south of the ranger station/museum, long since torn down.

The main difference for us in 1939 was that that summer Mother (Margaret Inabnit Orvis) played in the Ladies’ Ensemble. More about that small musical group in the next post in this series . . . .

Good news arrived in my inbox first thing this morning [February 2013]! Xanterra Parks and Resorts will continue to manage the hotels, restaurants, and some activities in Yellowstone.

I have known the concessionaire contract was up for renewal but not exactly when a new one would be awarded. As a yearly (or oftener) visitor to the park, I’ve had nothing but good experiences with Xanterra, and I find they keep getting better. Rooms are always clean and equipped as promised, restaurant food has been getting better, and their personnel is pleasant, helpful, and seems content to be working there. Many of the seasonal help return summer after summer.
Xanterra has also embarked on making the park greener, with recycling, serving locally obtained food products when possible, and other worthwhile projects. A major part of their new contract involves redevelopment of the dilapidating cabins at Canyon. Hooray!

An excellent article about Xanterra’s new contract by Ruffin Prevost appears at:
http://www.yellowstonegate.com/2013/02/park-service-chooses-xanterra-for-20year-yellowstone-concessions-contract/

[2012] I’m about to take off for my favorite part of the world. But I want to tell you about another delightful place I’ll go and an experience I’ll have while traveling this month. The place is called East Rosebud Lake, where private cabins are clustered around a beautiful Montana mountain lake and a trail begins, taking you over the Beartooth Mountains to Cooke City on the edge of Yellowstone.

I have hiked only a part of the trail, but my grandfather Fred Inabnit hiked many times in those mountains even before there were real trails. He and hardy groups of hiker/climbers that he organized and led from southern Montana went as far as they could with horse-drawn wagons and later cars in the early 1900s. Then they backpacked, with what we’d now consider crude equipment, into the mountains for many days at a time. They must have subsisted mainly on the fish they caught, because they couldn’t buy freeze-dried meals in 1910!

One of Fred’s goals was to find a way to the top of Montana’s highest mountain, Granite Peak. He never made it himself, but some of his colleagues found a route that took them up there. However, when he died, a group of his friends successfully petitioned the U.S. Board on Geographic Names to name a mountain for him. So this brings me to what I’ll be doing on August 26th.

Two years ago I helped to rededicate and unveil the plaque that had been placed at the foot of Fred Inabnit’s mountain. The plaque was brought down and is now attached to a large boulder in the meadow near the East Rosebud Trailhead. This year the Forest Service has completed an interpretive sign to place next to the plaque, so of course, we need a little ceremony to unveil it! That’s what I’ll help to do next week. A wonderful excuse to stay a couple of days at the place my grandfather loved and called “a little bit of Switzerland” after his native country.