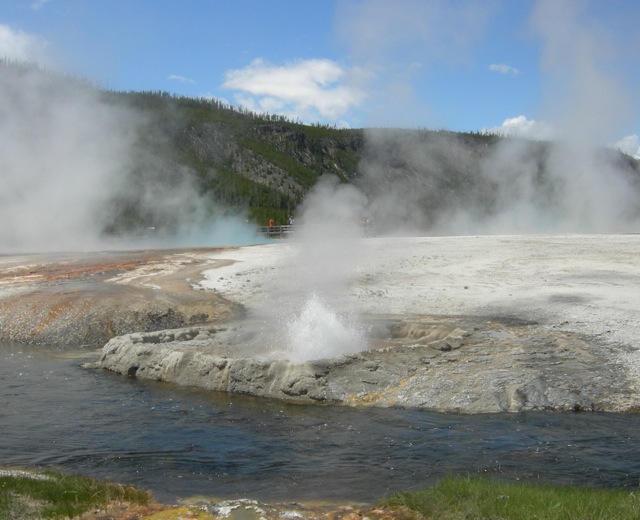 One topic that frequently comes up in the articles and blog posts on YellowstoneTreasures.com is the fact that Yellowstone is on a hot spot, which is the reason for all the wonderful hydrothermal features: geysers, hot springs, mudpots, and fumaroles. You can find lots of our interesting posts and pages about the supervolcano here: Search Results for “supervolcano.”

Recently we happened upon this 2015 Q&A on Quora.com that busts several myths at once, in a friendly and concise way.

Q. Does it look like Yellowstone is going to erupt soon?

A. There are no signs that we know of that point to an eruption any time soon. However, since we have never seen a volcano like Yellowstone erupt, we can’t be sure what the warning signs of an eruption would be. Some sensationalist sources take every little twitch from the volcano, and even events unrelated to geologic activity, as signs of an impending eruption. Don’t take them seriously.

In better news, at least one study has suggested that the magma chamber beneath Yellowstone is partially solidified to the point that it currently cannot erupt unless it gets a fresh batch of hot magma from the mantle.

One little misconception that should be covered here: Yellowstone is not “overdue” for an eruption. The little factoid that Yellowstone erupts regularly every 600,000 years is untrue. So-called super eruptions occurred 2.1 million, 1.3 million, and 640,000 years ago, which gives intervals between eruptions of 800,000 and 660,000 years, though three eruptions are not enough to establish a reliable recurrence interval.

In the guidebook: There’s much more in Yellowstone Treasures about the Yellowstone hot spot and supervolcano, especially in the Geological History chapter, pages 303 to 318.

Geysers can be categorized as one of two types: cone and fountain. Let’s see what page 61 of Yellowstone Treasures has to say about fountain-type geysers.

Such geysers have a very broad pool rather than a cone or narrow vent, and they usually erupt in a series of bursts, sometimes beginning with a blue dome-shaped surge. Great Fountain is perhaps Yellowstone Park’s largest fountain-type geyser. Eruptions usually range between 100 and 150 feet (30-45 meters) in height, and its vent is 16 feet (4.8 meters) across! In case you missed it, here’s Janet’s report on this blog about an early evening eruption of Great Fountain Geyser in 2014. She includes a video.

Another classic fountain-type geyser is Fountain Geyser, which may erupt as high as 100 feet (30 meters). Last year photographer and videographer Neal Herbert took a great short video of its eruption. Watch closely and you’ll see flashes of bright blue as steam bubbles explode and propel water from the crater (especially at the 50-second mark).

The most recent statistics of major geyser activity compiled by the National Park Service are from last November, “Current Activity of Selected Geysers.” When you travel there and want current predictions, you can either

Find out more about geysers elsewhere on this website, including “Yellowstone Geyser Eruptions: How Do They Work?”

Updates in the second printing

As promised, here are some of the updates we included in Yellowstone Treasures, Updated Fourth Edition, in the second printing this summer. You should get a sense for the level of detail in the book, as well as learning a bit of news. If you’re entering or leaving the park via the West Entrance, it’s worthwhile to make time to visit Earthquake Lake, northwest of West Yellowstone on U.S. 287. The picture here, taken by Bruno Giletti, is the same one you will find in the book. We rewrote the description to tell you the Gallatin Forest visitor center was remodeled in 2014. It displays interesting exhibits about the 1959 earthquake and landslide that killed 28 people, and how a potential Madison River flood was avoided.

Janet revised a bunch of the geyser information based on data from the Geyser Observation and Study Association and the folks at geysertimes.org (see our Yellowstone Links page for information about those organizations). Here are the changes in the Upper Geyser Basin descriptions:

Changes in what you can see when you visit led Janet to revise some wording. At West Thumb Geyser Basin, when you get to the lakeshore near Lakeside Spring you used to be able to see a remnant of concrete that supported a boat dock long ago. Now you can’t really see that, so we changed the sentence to be more informative and say “A boat dock for the Zillah, which ferried passengers to Lake Hotel from 1890 to 1907, was located here” (p. 141).

Also, when you stand at Uncle Tom’s Overlook on the South Rim Drive you can no longer see little Crystal Falls of Cascade Creek as easily across the canyon, because branches obscure the view (p. 180).

It’s interesting to see what a long-time observer of the park notices, isn’t it?
—Editor Beth Chapple

Lots of excitement among geyser gazers—Morning Geyser is erupting!

Here is something I can only hope will keep happening until I arrive at Old Faithful on June 21st. Rare and phenomenal eruptions of Morning Geyser have been taking place quite frequently since March. Eruptions can go as high as 200 feet, and, best of all, it occasionally erupts in concert with its close but more frequent neighbor Fountain Geyser.

This Fountain Paint Pot area geyser had not erupted since 1994. Its eruptions seem to be somehow tied to those of its close neighbor Fountain Geyser, and geyser blogger Janet White provides us with this advice:

More information and Janet’s excellent pictures are at: http://www.yellowstonegate.com/2013/06/9th-known-dual-eruption-of-both-morning-fountain-geysers.

[9/13/13 update: Morning Geyser is still erupting quite frequently, but I did not manage to see it during my June visit to the park.]

Yellowstone Volcano Observatory scientist not worried about an imminent supereruption

Today I’m wearing my Supervolcano T-shirt, acquired at a preview showing of the 2005 BBC/Discovery Channel movie of that name. It was a scary movie for anybody, and the Internet spin it engendered has continued, since apparently many people have taken this fictional treatment as something all of North America needs to worry about from now on. Yellowstone Treasures (meaning me) interviewed our geologist (my husband Bruno) about this, and we put his comments up on our Web site soon after the movie was shown. See the nugget called “The Yellowstone Supervolcano.”

Even before that movie came out, the USGS had set up the Yellowstone Volcano Observatory, and Jacob Lowenstern is now its esteemed head scientist. Here’s part of what he said in a recent e-mail interview. Before upping the Yellowstone supereruption alert level, he wrote, “we’d need to see more going on than what we’ve seen, and we’d want to see deformation and earthquakes happening simultaneously and in some abundance.” Even those warning signs wouldn’t necessarily mean a massive eruption, the scientists are quick to note. “Scientists are reasonably good at short-term forecasts of volcanic activity but cannot look long into the future.” However, Earth’s tectonic plates are too complex for their future to be knowable. Thus, in lieu of predicting exactly when specific earthquakes and volcanic eruptions will happen, geologists “typically rely on probabilistic evaluations that are based on how often volcanoes have erupted in the past.”

“It could still be tens of thousands of years before the next eruption. Having said that, it is always possible that things could change… and that’s why we keep a close watch.”

Supervolcano: are we ready for another caldera explosion?

Categories: Science, Thermal features
Tags: eruptions, geologists, geology
Comments Off on Supervolcano: are we ready for another caldera explosion?

[Update 6 Sept. 2010: Looking at this post’s title again, I realize the word “ready” is ambiguous there. We will never be ready to be inundated with hundreds or thousands of square miles of ash and lava. The hope is simply that we can be warned in time to get out of the way when it does happen. And that is the best that modern scientists can prepare us for at this time. Such forces of nature do not wait for man to figure them out.]

As I pack for my annual trip to Yellowstone, people ask me if I worry about the escaped Arizona criminals being in the area or the potential eruption of the so-called supervolcano. My answer is no to both, since the chance of running into the criminals is probably less than that of being struck by lightning, and the caldera eruption will give us ample warning, now that the equipment and organization of the Yellowstone Volcano Observatory team is in place.

Predicted in our interview with Yellowstone Treasures’s geologist is the putting in place of a scientific team and equipment to detect any changes in underground activity that will precede the next caldera eruption.

You can download a USGS paper detailing the mechanisms for detecting and warning the public about “episodes of unusual geological unrest at the Yellowstone Caldera” at: http://pubs.usgs.gov/circ/1351. This sets up an Incident Command System, explains how the various personnel and agencies will be structured and will react with each other in the case of impending danger, and how the public will be kept informed. It also outlines specific scenarios for reaction to catastrophic events.

As for me, I won’t be writing blogs in the next while but will be enjoying favorite places and friends in and around Yellowstone.

There’s not much snow yet [in December 2009], but the southern part of the park could get three to six inches this weekend, and visitors who want to enter on snowcoaches or snowmobiles on opening day, December 15th, may be in luck. Or they may have to go the only way allowed, if there’s not enough snow——by commercial wheeled vehicle, that is, buses.

You can check out what Old Faithful looks like in daylight hours at the Old Faithful Webcam and judge for yourself whether the snow is getting deep by checking out whether or not the viewing benches are covered. Then starting Tuesday, the predicted time of the geyser’s next eruption will be posted.

Meanwhile, if you just want to enjoy ice-skating in a swinging western town, you can visit the newly revamped skating rink in West Yellowstone, Montana. According to a local news source:

The new and improved ice rink will make the process of making and maintaining a smoother surface easier and more efficient by keeping the water in place while freezing. In years past, the ground would have to be completely frozen and then saturated with a fine mist, a process that could take weeks to accomplish. This year, the ice rink was erected and flooded in two days.