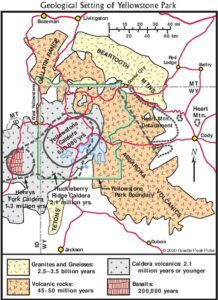 Recently we heard from someone who found our article on Beartooth Butte confusing, so I revised that “Nugget” to be clearer. We describe a geological feature you can see if you drive outside the Northeast Entrance of Yellowstone National Park toward Red Lodge, Montana. The part we had to clear up is that Beartooth Butte is in Wyoming, but the Beartooth Range is almost wholly in Montana. The butte sits above a lake with the same name, about 20 miles on US Highway 212 from the state line.

Did you know that geologist Jo-Ann Sherwin and I spent a lot of time updating the geology in the latest edition of Yellowstone Treasures? This map we revised is the most technical one, not intended for navigation like most of the 38 maps in the guidebook! Besides the types of rock in the different mountains, the map shows calderas. (A caldera is a large circular or elliptical crater or depression formed by the collapse of a large land area after the emptying of a magma chamber in a massive volcanic explosion.) Notice how the most recent—and famous—Yellowstone Caldera is marked with a solid line because much of its edge is visible at the surface. Meanwhile, the Henrys Fork and Huckleberry Ridge Calderas have a dashed outline to show that the caldera edge is buried under more recent volcanics. East of the park, the dotted outlines of the Heart Mountain detachment and its remnants show their general size, shape, and location. These are large chunks of Paleozoic sedimentary rock that became detached from the underlying rock and slid to the southeast over the Bighorn Basin. There’s lots more to explain calderas and other geological formations in the guidebook’s Geological History chapter.

Elsewhere on this website you can read about “The Yellowstone Caldera” and the Heart Mountain Interpretive center: https://www.yellowstonetreasures.com/2013/07/14/trip-report-heart-mountain/.

Trip report: Back to the park from Heart Mountain

Overall, our side trip to Heart Mountain this summer was very worthwhile, reached by taking U.S. Highway 14A thirteen miles northeast of Cody and turning left on Road 19.

A bonus added to this excursion was that my friends and I returned to the park by way of the Chief Joseph Scenic Byway, across the beautiful 8,071-foot pass over the mountains and into the Northeast Entrance to Yellowstone. The pictures show scenes along the road: Steamboat Hill on the left and Sunlight Gorge on the right. Friend and colleague Suzanne Cane was my wonderful 2013 photographer.

I’ve had good excuses to go to Yellowstone Park and environs at least once every year since 1995. That was the year I began researching and writing Yellowstone Treasures. I often try to do something new to me as well as catching my favorite geysers, hot springs, terraces and scenes (like Lower Falls and the Canyon of the Yellowstone River from Artist Point) that never fail to give me goose bumps. People have recommended the Heart Mountain Interpretive Center to me since it opened in 2011, but this was the first time I got to visit [June 2013]. I made it this summer’s new attraction.

The exterior of the center itself is built to echo the construction of the barracks that housed 14,000 people between winter 1942, when a government order displaced all West Coast Japanese from their homes, and the end of that relocation in November 1945.

A movie about the camp explains to visitors why the camp was built and how the internees made the best of their confinement there. You can see mementos and sample family quarters. A knowledgeable docent is available to answer questions as you wander about the center’s displays.

Most impressive to me, in addition to how well these unfortunate people coped with their unreasonable confinement, were two facts. First, about 600 men from Heart Mountain enlisted or were drafted into the armed forces during the war, including the highly decorated 442nd Combat Team. Then, among the interned Japanese were people who understood how to use the barren land around them. They repaired and lined the irrigation ditch from the nearby Buffalo Bill Reservoir, turned it onto fertile fields, and eventually grew 45 different crops—enough to feed the camp, preserve some for winter use, and even send food to other internment camps.

Updated January 26, 2021. See the second part of this trip report with photos: https://www.yellowstonetreasures.com/2013/07/15/trip-report-back-to-the-park-from-heart-mountain/.