The National Park Service has announced a proposal to charge larger fees for seventeen of its most popular parks, beginning next spring. I learned about this through the excellent KQED California Bay Area radio program, “Forum,” and considered registering a comment with the NPS.

Considering the dire condition that many of our parks are now in due to underfunding by the federal government, it probably makes sense to raise entrance fees for people who are actually using these parks, especially during the busiest seasons (May through September for Yellowstone).

A caller to the program brought up the subject of charging more for people from other countries than for U.S. citizens—a thought that had also crossed my mind while I was listening. After all, when Congress passed the 1872 act setting aside Yellowstone, the very first national park in the world, they stipulated that it was “for the benefit and enjoyment of the people,” and chances are they were thinking of American people. Whether or not charging more for foreign visitors is a good idea (and I’m not sure it is), that is not a consideration included in the present proposed fee change.

Decide for yourself whether this fee hike would be a wise move by going to: [link] the NPS website. 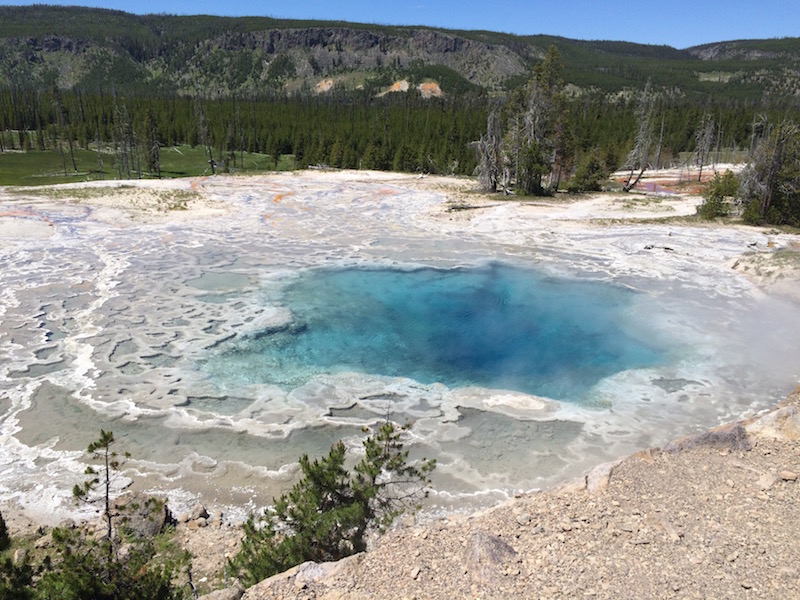 To celebrate, we would like to be sure you know about the Official Federal Recreation Lands Photo Contest, “Share the Experience.” This contest is sponsored by the National Park Foundation and FindYourPark.com/EncuentraTuParque.com. Through December 31, 2017, amateur photographers are invited to submit photos that highlight the best of America’s federal lands, national parks, and historical sites in various categories. The grand prize includes getting your image on the Annual Federal Recreational Lands Pass (2019), which is distributed to over 300,000 people annually, plus $10,000 and a bunch of camera gear. Wouldn’t it be cool to see an image from Yellowstone National park on the pass? The 2nd and 3rd prizes also include money and camera gear. You can see the winning photos from 2016 as well as more recent photos in the gallery at the Share the Experience website. That is also the place to learn about the contest rules and guidelines.

Photo Credit: Janet Chapple, June 2015. You can reach Artemisia Geyser’s beautiful pool and formation in one of two ways. One is by walking beyond Riverside Geyser about half a mile up what used to be the main road and is now a rather rough trail past Morning Glory Pool (page 95 in Yellowstone Treasures) or by parking at Biscuit Basin and crossing the road to reach the other end of the trail from Morning Glory Pool.

I just answered an amazing question on quora.com: “What are the dangers of taking a train to Yellowstone?”

To my mind this is a strange question, but perhaps the person asking it does not know where trains do and do not run in the U.S.

It would be great if there were still trains to one or more of the entrances to the park. However, the last passenger train, the Northern Pacific, to terminate at Gardiner, Montana (the North Entrance) arrived with a passel of Girls Scouts in 1955, and one could only get as far as Livingston on a train up to 1979. The other railroads that took passengers near the park had stopped running trains to the vicinity of Yellowstone even before that.

Your present options are taking a tour bus, flying to one of the gateway towns that has an airport and renting a car, or driving in your own car, which people do from every state in the Union.

Personally, I would think it high time that railroads reconsider the possibility of building tracks back to Gardiner, Cody, and/or West Yellowstone. The National Park Service should then set up shuttle buses to all the major points of interest—if only there were money for such a dream to come true any time soon. . . .

The 145th anniversary of Yellowstone Park

Yellowstone National Park was set aside as the world’s first national park 145 years ago, on March 1, 1872. An act of Congress on that date made sure that settlement and sale of the land was prevented, and set it apart “as a public park or pleasuring-ground for the benefit and enjoyment of the people.” We placed the text of this important document on page 50 of the Through Early Yellowstone anthology, along with stories by explorers, adventurers, and tourists. Let’s appreciate what our nineteenth-century lawmakers did for us! This fox was spotted tracking a snowshoe hare from atop the Roosevelt Arch at the North Entrance earlier this month.

Let’s take a breather from the national news scene to look at the amazing popularity of Yellowstone Park in 2016. The National Park Service office has recently announced record visitation for last year: 4,257,177 visitors came through the gates, up nearly 4 percent over last year’s record. Their January 17th press release attributes much of this huge influx to the number of commercial tour buses—12,778 last year. It’s wonderful to know that people from all over the world are able to travel and enjoy Yellowstone’s wonders, but limits on numbers or timing of visits probably need to be set up to conserve natural resources and keep the park beautiful.

Since the NPS is obliged by law to preserve the parks “for the benefit and enjoyment of the people”—as well as to conserve their natural resources—officials are pondering ways to carry out these sometimes opposing obligations. Way back in May of 2011, I developed a plan for a shuttle system on the west side of the park. Unlike a park such as Zion, which essentially has one central road, the figure-eight system of park roads in Yellowstone does not lend itself well to shuttles, but having only the most-traveled west side accessible by shuttle and creating incentives to encourage able-bodied visitors to use them would help the congestion.

As someone who has enjoyed the park for over three-quarters of a century, I don’t want us to love it to death! August 25th is the official 100th anniversary of the founding of the National Park Service. Every year the national parks offer free admission on this day, but for the centennial the free days have been extended through the weekend, to August 28th. Enjoy!

Yellowstone Park is holding a big, sold-out celebration at Arch Park at the North Entrance, with shuttles from Gardiner. If you didn’t get a ticket, you can still participate virtually via Livestream.

If you do have plans to visit Yellowstone any time soon, be sure to keep track of the fires and other construction and road alerts at the official Yellowstone website. Sean Reichard has written several posts recently about the various fires being fought. Here is one of his articles this week: “More trails close as fires grow in Yellowstone National Park.”

Some of the plowed roads in Yellowstone are open for just a short time every year to bike riders. This great opportunity to enjoy the road from West Yellowstone to Mammoth car-free lasts until April 15th, when the other park roads gradually open to motorized vehicles. You can enjoy the quiet, the animals, and all the beauties of the northwest part of the park on two skinny wheels. Click here for all the details. Note that the road from Madison to Old Faithful is closed at this time for bear management. Reenactment of John Muir and President Teddy Roosevelt’s camping trip in Yosemite Valley to discuss the future of a National Park system.

Today I had the chance to preview National Parks Adventure 3D, a new IMAX movie that opens nationwide this month. Places to see it include the science museums of Philadelphia, Portland, and Seattle, the aquariums of Chattanooga and Omaha, and the natural science museum in Houston. The giant-screen format is perfect for immersing oneself in awe-inspiring footage of various of the larger national parks, including Grand Teton, Yellowstone, Glacier, Yosemite, Grand Canyon, Crater Lake, and Bryce Canyon. I can promise a gorgeous view of Grand Prismatic Spring in Yellowstone.

The songs to go with the wonderful colors and aerial views range from “Hallelujah” from the Shrek soundtrack to James Bay’s 2014 folk rock hit “Hold Back the River,” with, of course, “This Land is Your Land” as well. We also hear bird song, coyote howls, bear grunts, and running water.

According to ABC News, the filming lasted nine months and cost 12.5 million dollars. The narrator is Robert Redford. You can learn more at the film’s website.

But the movie is not only a compendium of beautiful sounds and images. There is a plot and plenty to admire as three adventure travelers climb and paddle in various parks. And the movie informs us about John Muir and President Theodore Roosevelt, reenacting their historic three-day camping trip in the Yosemite Valley wilderness. It’s a fitting way to celebrate President’s Day weekend and this year’s centennial of establishing the National Park Service. I recommend you go and bring friends and family!

The National Park Service has announced that Yellowstone Park has just had another record year. Nearly 600,000 more people passed through the park’s five entrances in 2015 than in 2014, a total of 4,097,210.

As always, the West Entrance was the most popular, and more people visited in July than in any other month, with August and June just behind in numbers.

The NPS attributes this year’s popularity to lower gas prices, stepped-up marketing by Montana and Wyoming tourist bureaus, and the NPS’s own “Find Your Park” program. In addition, beginning last year, to encourage visitation, all families that have a fourth grade student may enter any national park without paying an entrance fee.