Here is my answer to the 6/11/18 question on the Quora website: What are some sights to see in two days at Yellowstone National Park? (BTW, Two days is not nearly enough for a place as large as Yellowstone.) 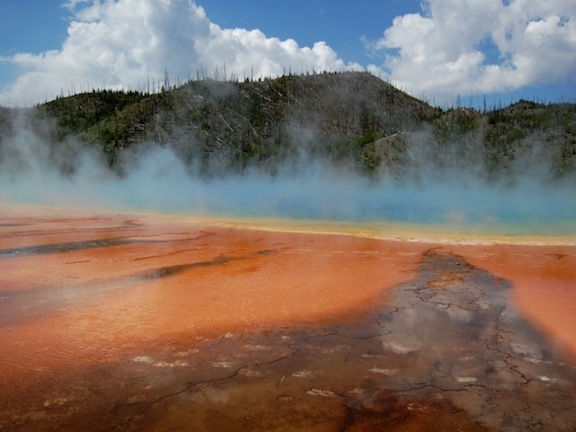 Grand Prismatic Spring, the same one that is featured on the cover of “Through Early Yellowstone”

The century-long-and-then-some favorites are the Grand Canyon of the Yellowstone River with its two great waterfalls and Old Faithful Geyser. But before or after the always-predictable Old Faithful eruption take the Geyser Hill walk with or without an interpretive ranger and enjoy lovely hot springs and the possibility of other geysers going off. The other most remarkable sight near Old Faithful (a few miles north of it) is Midway Geyser Basin, but you *must* get there early or late in the day to find parking.

Be ready to stop as you drive between these major attractions, since there are pleasant surprises (sometimes including wildlife) all along the roads.

Geysers can be categorized as one of two types: cone and fountain. Let’s see what page 61 of Yellowstone Treasures has to say about fountain-type geysers.

Such geysers have a very broad pool rather than a cone or narrow vent, and they usually erupt in a series of bursts, sometimes beginning with a blue dome-shaped surge. Great Fountain is perhaps Yellowstone Park’s largest fountain-type geyser. Eruptions usually range between 100 and 150 feet (30-45 meters) in height, and its vent is 16 feet (4.8 meters) across! In case you missed it, here’s Janet’s report on this blog about an early evening eruption of Great Fountain Geyser in 2014. She includes a video.

Another classic fountain-type geyser is Fountain Geyser, which may erupt as high as 100 feet (30 meters). Last year photographer and videographer Neal Herbert took a great short video of its eruption. Watch closely and you’ll see flashes of bright blue as steam bubbles explode and propel water from the crater (especially at the 50-second mark).

The most recent statistics of major geyser activity compiled by the National Park Service are from last November, “Current Activity of Selected Geysers.” When you travel there and want current predictions, you can either

Find out more about geysers elsewhere on this website, including “Yellowstone Geyser Eruptions: How Do They Work?”

Since I never tire of watching Yellowstone’s geysers, this year I gave myself all of one day, August twelfth, for chasing the best eruptions. I was richly rewarded.

Starting early, before the Old Faithful Visitor Education Center opened and posted its predictions, I took a chance that there might be an early morning eruption of Great Fountain Geyser that I could catch, but sitting at its shapely formation for 45 minutes, I saw only small bursts and had to conclude that I had missed it.

Still, delighted to find that my FRS radio worked even nine miles from Old Faithful, I heard that Fountain Geyser (in the Fountain Paint Pot area) had started erupting at 9:12, so I got there as quickly as exceeding the speed limit (just a little) would allow. I was in time to witness the latter part of Fountain’s eruption, which continued until 9:48. Jet Geyser was spouting in all directions, and little Twig Geyser contributed, too.

Red Spouter’s northern vent was acting as a very loud fumarole, and the southern vent was boiling vigorously, showing that the water table is relatively high for this late in the summer, thanks to ample rainfall. A clever new sign at the Paint Pot gives us the “Recipe for Mudpots.”

Fortunately, I had arrived at the parking lot before the 10:00 am crush, when tour buses and the majority of private vehicles make parking next to impossible. (The same was true this August at Norris Geyser Basin.)

Being able to phone the Old Faithful V.E.C. for geyser predictions this year proved its value: I learned from calling (307) 344-2751 (x2) that I might get back to Upper Geyser Basin in time for Grand Geyser, whose four-hour window was given as 9:15 am to 1:15 pm. Sure enough, arriving at Grand at 11:23, I had only a half-hour wait. Just after the second Turban Geyser eruption that I witnessed, Grand began and gloriously lived up to its name. Its two bursts spanned about fourteen minutes, and I was able to record some of the high points on my iPhone. This was one of the highest and most exciting Grand eruptions I’ve seen in recent memory.

The magma system or reservoir under Yellowstone is 2.5 times larger than previously known

[Editorial update: On December 18, 2013, USGS research scientist Jake Lowenstern, Scientist-in-Charge of the Yellowstone Volcano Observatory, e-mailed us to provide a clarification of this research:
“They are not imaging the hotspot, which is a global feature that extends into the mantle. They are imaging the shallow magma system that lies in the upper 10 km of the crust and feeds the actual eruptions.”]

Recent articles including “supervolcano” in the headline in the blogosphere and in media such as the New York Post shout “We’re probably doomed” and tell us of “a volcano that could wipe out U.S.” That gets people’s attention! The whirl of media activity is all due to research presented at last week’s American Geophysical Union (AGU) annual meeting in San Francisco.

An interesting session and a poster presented by Drs. Robert Smith and Jamie Farrell have stirred up a lot of emotional response, as has a November earthquake swarm in the area. The more these things are discussed in the media, the less rational readers seem to become. Media loves sensation. Perhaps the scientists whose work inspired the sensationalism will soon issue something to calm people down. Meanwhile, I’ll do what I can with this post.

I attended Smith’s 15-minute session at AGU and read Farrell’s poster last week. I am not a scientist, but I know enough about Yellowstone and current research to say this: The size of the magma reservoir below Yellowstone tells us nothing about when it will explode. Just as a reminder, magma is liquid or molten rock, including any dissolved gases or crystals, found deep within Earth.

More and more researchers are using various methods and instruments (seismometers, strainmeters, geochemical analyses, geodesy, instruments measuring electrical conductivity, and so on) to study what is under Yellowstone and its surroundings. Let’s wish them well and not panic about a catastrophe that is very unlikely to happen within the lifetime of anyone who can read this.

What about those earthquakes? One useful conclusion reached by this recent research is: “A large earthquake at Yellowstone is much more likely than a volcano eruption,” according to Farrell.

ON THE WEB: Here is some reliable and interesting information:
1. University of Utah’s Seismology and Active Tectonics Research Group’s faculty member Bob Smith stated on December 5th that U. of Utah’s seismographs will “continue to monitor Yellowstone earthquakes and will provide additional information if the earthquake swarm activity increases.”

2. U.S. Geological Survey’s Yellowstone Volcano Observatory. Swarms of (usually small) earthquakes have been reported frequently over the years; they are detected by the USGS seismograph array in Yellowstone.

3. Phys.org’s article called “Study: Yellowstone magma much bigger than thought (Update).” A relevant quote serves to sum up my comments here: “For years, observers tracking earthquake swarms under Yellowstone have warned the caldera is overdue to erupt. Farrell dismissed that notion, saying there isn’t enough data to estimate the timing of the next eruption. ‘We do believe there will be another eruption, we just don’t know when,’ he said.”

My routine whenever I’m at Old Faithful Village is to go to the Visitor Center when it opens at 8:00 am to check out the geyser predictions for the day. Last month I was able to catch most of my favorites—except Grand and also Fan and Mortar eluded me.

I was especially lucky to see two Beehive eruptions from the start, because before I was there and now after my visit, Beehive’s indicator is taking over. The indicator is a small geyser located next to Beehive’s large cone, and it commonly spouts a few feet for 10 to 30 minutes before Beehive’s incredibly powerful straight, high eruption. Now the indicator is going off every few hours and Beehive rarely.

With a little patience I was able to see a lovely Fountain Geyser eruption (at Fountain Paint Pots) and two Great Fountains. Unfortunately, the invaluable Lynn Stephens is no longer monitoring Great Fountain; for the past several years she has stayed in that geyser’s parking lot and noted when the overflow began, so that the prediction window could be narrowed, making the wait for the eruption much shorter. Due to an unexplainable fiasco with the National Park Service, her volunteer services have been terminated. She is sorely missed by geyser watchers. However, this summer we did have an apprentice of Lynn’s, Maureen from West Yellowstone, who has been able to watch the overflow quite often and help those of us with less time than we’d like to have see the eruptions.

Walking out beyond Grand Geyser one day I noted that Chromatic Pool was more colorful (because hotter) than its neighbor, Beauty Pool. At Biscuit Basin, the three pools as you enter there seemed to me the hottest I’ve ever seen them, and the perpetual spouter (new in 2006) near the river continues to play. The most beautiful pools I saw this year were at Midway Geyser Basin. Besides the ever-incredible Grand Prismatic Spring, its neighbors Turquoise and Opal pools were outstanding. I believe Opal erupted a few days after I was there.

So the park is never the same on two visits, but it never fails to delight me!

There’s not much snow yet [in December 2009], but the southern part of the park could get three to six inches this weekend, and visitors who want to enter on snowcoaches or snowmobiles on opening day, December 15th, may be in luck. Or they may have to go the only way allowed, if there’s not enough snow——by commercial wheeled vehicle, that is, buses.

You can check out what Old Faithful looks like in daylight hours at the Old Faithful Webcam and judge for yourself whether the snow is getting deep by checking out whether or not the viewing benches are covered. Then starting Tuesday, the predicted time of the geyser’s next eruption will be posted.

Meanwhile, if you just want to enjoy ice-skating in a swinging western town, you can visit the newly revamped skating rink in West Yellowstone, Montana. According to a local news source:

The new and improved ice rink will make the process of making and maintaining a smoother surface easier and more efficient by keeping the water in place while freezing. In years past, the ground would have to be completely frozen and then saturated with a fine mist, a process that could take weeks to accomplish. This year, the ice rink was erected and flooded in two days.