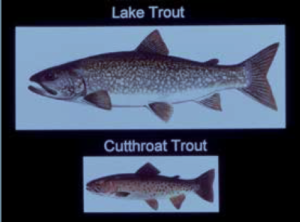 The new edition of Yellowstone Treasures says: “Although some larger lakes of southern Yellowstone were intentionally stocked with lake trout long ago, these large predator trout, illegally introduced into Yellowstone Lake in 1994, have caused a drastic reduction in the lake’s cutthroat trout that may never be reversed. However, the combined NPS/Yellowstone Park Foundation aggressive efforts—gillnetting and electrofishing—had begun to pay off by 2012, and lake trout numbers are now declining each year, while cutthroat trout numbers are increasing. Researchers now know where the lake trout spawn, and some eggs can be killed. Meanwhile, anglers must kill all lake trout and either eat them or puncture the air bladder and dispose of the carcass in deep water.”

Ted Koel and his team are now using “Judas fish” to lead them to schools of lake trout, and they employ aircraft to locate the tagged lake trout. As this year’s fishing season opens in Yellowstone, you can read all about it in this recent Powell Tribune article by Mark Davis.

The Marvels of Yellowstone Lake 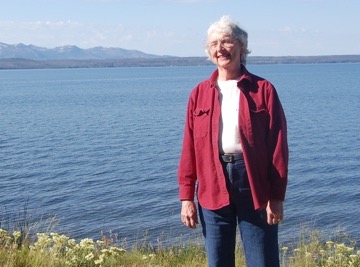 While we recline in the doldrums awaiting the opening of Yellowstone Park’s roads—mostly on April 21st, when the bulk of the plowing should be done and wheeled vehicles can again reach the interior of the park—I will pass along a link about a man who is building a robot to learn what is below Yellowstone Lake and is yet to be discovered and explained by scientists. Elsewhere I learned that project leader David Lovalvo’s crowd sourcing for this project reached its goal of raising $100,000 last year.

Granted, this article appeared on the Internet a year ago, but its interest is evergreen. Geoscientists at the U.S. Geological Survey, particularly Lisa Morgan, Wayne Shanks, and Kenneth Pierce, published classic research papers on what they had learned by 2007*. But there is much more of interest lurking in the depths of the lake, and I only hope to live long enough to find out more about it.